A sample of unprocessed sweet wormwood, a wild grass being processed by Guilin Pharmaceutical, one of only two Chinese companies converting the wild grass herbs into raw material for treating malaria, and the finished product in a pill, in Beijing on Dec. 19, 2004.
Frederic J. Brown—AFP/Getty Images

The 2015 Nobel Prize for Medicine or Physiology recognized three researchers who made pioneering contributions to the treatment of parasitic diseases, which affect tens of millions globally. Tu Youyou was recognized for her work on the anti-malarial drug artemisinin, a natural product derived from wormwood, with origins in ancient Chinese herbal medicine. Likewise, co-recipients William Campbell and Satoshi Omura were cited for their research on a treatment for roundworm using the drug ivermectin, a derivative of a natural product found in soil bacteria.

The research cited was initiated decades prior and has inspired many others to conduct cutting-edge research in the field of so-called neglected diseases – diseases where millions may be afflicted, yet few options for treatment are available. Based on a combination of factors, not the least of which is economics (it is estimated that the cost of developing a new drug and launching in the marketplace is upward of $1 billion), new treatments for neglected diseases have severely lagged behind those for conventional diseases such as cancer, rheumatoid arthritis and diabetes.

It is interesting to note that both Nobel-recognized remedies are natural-product-derived. In a world where the majority of FDA-approved drugs are chemically synthesized in the laboratory, it behooves us to be mindful of the vast and diverse array of chemical entities that nature has made available to us, either as potential drugs or as inspirations for synthetic drugs which are closely related. There’s been a general push away from natural-products-based therapeutics over the past decades. Previously, most major pharmaceutical companies had a dedicated natural products division, but few remain in the present day.

Academics starting to fill in the gap

In response to the global challenge of neglected diseases, university researchers have begun to make inroads to stock the pipeline of drugs for treatments.

Backed by funding from government agencies (in the U.S., principally the National Institutes of Health) and foundations (for instance, the Gates Foundation, Medicines for Malaria Venture, Drugs for Neglected Disease Initiative), a number of compounds have been identified and are headed for clinical development.

At our own institution, we established a center for Neglected Disease Research, and our academics are developing compounds for the treatment of malaria, Leishmania, Chagas disease and African sleeping sickness, to name a few.

This mission is consistent with the nonprofit status of a university. Students are attracted to the discipline based in part on a sense of social responsibility. While working on these critical problems, they receive training in drug discovery and development skills, generic enough to prepare them for productive careers in the traditional pharmaceutical industry. It also exposes them to issues in global health and typically involves collaboration with a multitude of academic and industrial partners on their projects.

As one example, free from constraints regarding intellectual property rights, we have established data-sharing plans with academic collaborators in the U.S., Europe and Asia which allow researchers to more rapidly identify promising drug candidates.

To be successful in this field requires patience, tenacity, ingenuity and collaborative mindset. One team at our institution is developing devices that are able to cultivate new bacteria that can be “mined” to search for new natural compounds they produce. Another is developing new rules of thumb to predict which types of drugs should be designed to penetrate the cell wall of so-called “Gram negative” bacteria – many of which are deadly, are becoming drug-resistant and are a source of major concern in hospitals.

Pharmaceutical companies still have a role to play

As always, actual development of drugs for clinical usage will require close collaboration with industry partners. Indeed, one of the Nobelists, William Campbell, conducted his groundbreaking research at the then Merck Institute for Therapeutic Research in New Jersey.

There are a number of ways to facilitate such interactions in the area of neglected diseases. One, which we are currently engaged in, is the repurposing of existing FDA-approved drugs for use in neglected disease. Given the huge development costs for new pharmaceuticals, it makes sense for corporations to make available quantities of approved agents and related chemical structures for researchers to investigate other applications.

One mode of research investigates use in alternative diseases – it’s noteworthy, for example, that the malaria drug artemisinin, which is the subject of the Nobel Prize, also exhibits anti-cancer activity. Another mode works to understand the fundamental molecular targets of the drugs in cells. Many drugs interact with multiple cellular targets, and unlocking this knowledge allowed one of our team to repurpose an oncology drug for use in a neglected disease.

The Nobel awards are laudable, as the work has had global impact and their efforts will stimulate others to pursue similar objectives. Nature has provided us with a veritable arsenal of weapons for use against complex diseases. Harnessing their power effectively can and will have a major impact on global health, and it is incumbent on us to continue the efforts of these exemplary leaders. 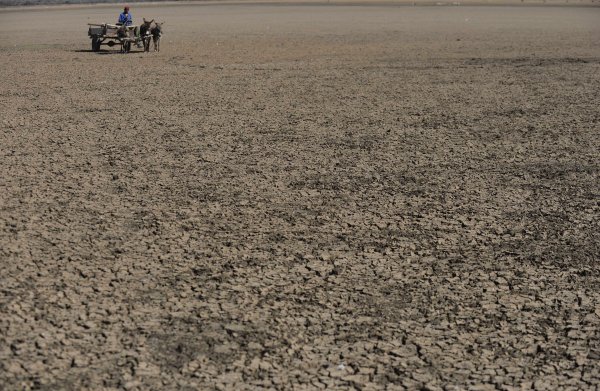 Climate Change and El Niño May Leave 10 Million Hungry
Next Up: Editor's Pick