Microsoft unveiled a handful of new devices at a New York City event Tuesday, ranging from a potentially groundbreaking new laptop to a revamped version of its fitness tracker. Taken together, Microsoft says its new devices are all about boosting productivity. “We make things that help you make things,” said CEO Satya Nadella.

Here’s what you need to know about Microsoft’s new hardware and other announcements.

Microsoft saved the best for last, but this wrapup doesn’t have to. The Redmond, Washington based company has been trying to replace your laptop with its Surface tablet lineup for years, but now it’s aiming to redefine the laptop entirely. The Microsoft Surface Book is a high-powered laptop with a detachable 13.5-inch touchscreen display, running Windows 10 and powered by Intel’s i5 and i7 processors.

If the Surface Pro lineup is Microsoft’s answer to Apple’s MacBook Air, the Surface Book is aimed squarely at taking on the MacBook Pro. Microsoft’s first laptop is an impressively designed piece of hardware that goes on sale Oct. 26 starting at $1,499.

For Surface fans not looking to drop a grand and a half on a new machine, there’s the Surface Pro 4. The 12.3-inch Windows 10 tablet is the thinnest and lightest Microsoft’s ever made, a follow-up to the well-received Surface Pro 3. The company also says it’s 30% more powerful than its predecessor. A new Surface Pro cover, meanwhile, brings a bigger trackpad and a fingerprint scanner for Surface Pro 3 users.

Microsoft’s new high-end Windows 10 smartphone comes in two flavors: The 5.2-inch Lumia 950 and the 5.7-inch Lumia 950 XL. The smaller 950 runs on a Qualcomm Snapdragon 808 hexacore processor, while the bigger 950 XL packs a Snapdragon 810 octacore heart. Both share the same 20 megapixel camera. The Lumia 950s start with 32GB of storage, but SD card slots mean you can expand that to up to 2TB, once cards that big become available. Microsoft also says the phones are liquid cooled, but didn’t provide further details about how that works.

By far the most impressive feature of the new Lumia smartphones, however, is Microsoft’s Continuum. Basically, Continuum lets users plug their smartphones into full-size PC monitors, opening up a desktop-style experience powered by a mobile handset. This is a core feature of Windows 10 and could be a big selling point to help Microsoft breathe life into the struggling Windows Phone category.

The Lumia 950 and 950 XL will retail for $549 and $649 respectively starting in November. There’s also the $139 Lumia 550, an entry-level device first hitting certain European markets.

Microsoft’s fitness tracker, the Microsoft Band, got a big refresh, but it’s still known as the Microsoft Band. A new curved display looks to solve what was many customers’ biggest gripe about the device: It just didn’t look all that great. A new barometer sensor measures elevation gains for hikers or stair-climbers; there’s also GPS, heart rate monitoring and other features you’d expect from a high-end fitness tracker. The Microsoft Band is on sale later in October for $249.

Microsoft says there’s now more than 110 million devices running Windows 10. The company also said the hotly anticipated developer’s kit for its HoloLens augmented reality headset will be available in the first quarter of 2016 for $3,000. 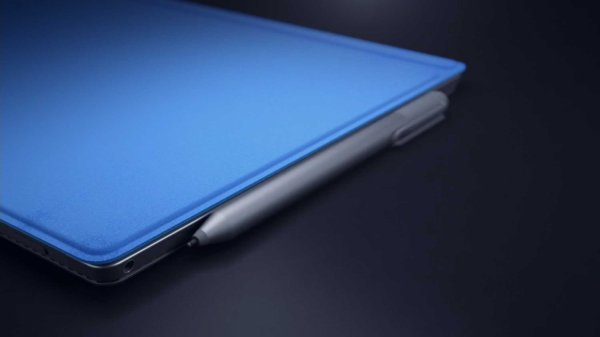 Microsoft Just Made Its Surface Pro Way More Compelling
Next Up: Editor's Pick