Why You Should Always Be Working on New Ideas

What other company on the planet besides Nike has been able to create an iconic brand around three words?

It’s so simple, yet the concept of “just doing” something sheds light on the fact that in many cases, we just aren’t doing anything. Or we aren’t doing enough of anything significant.

Think about your history of getting things done. (That chill running down your back right now is called a cringe. It’s ok, embrace it. We’re going to get through this together.)

How many great ideas have you had that you just knew were going to make you the next Zuckerberg? If you’re an entrepreneur, you’ve probably had hundreds. Ideas won’t leave the creative soul alone. It’s a 24/7 job just fending them off.

Maybe the really powerful ideas got you so fired up that you even started talking to your friends about them. You wanted to get some validation from others that your idea was as genius as you knew it was.

Maybe you even called your mom. You were that excited.

Then, like clockwork, the inevitable happens. Something in your brain goes off. It starts small. You feel the tiniest tinge of doubt. It’s almost an imperceptible sensation. You realize how hard this is actually going to be.

You start thinking about all the pieces of this giant puzzle that you haven’t the slightest clue how to procure.

Instant overwhelm. However, rather than acknowledging the doubt for what it is, you find a way to wiggle your way out of your own plans. If you’re a master-avoider like me, you probably mask the deceit by coming up with another world-class idea.

You declare the original idea to be fundamentally flawed in some way and then, get this, you are actually thankful to yourself for not wasting anymore of your precious, productive time on an idea that was obviously doomed from the start. If friends or family ask about the old idea (they have no idea that you moved on days ago), you treat it like a dead pet.

“That idea isn’t with us anymore. It’s gone to a better place.”

This is all face-saving at it’s finest. You don’t really feel good about giving up on your own ambitions, but you feel like you have no choice. You’ve run all the statistical models in that big genius brain of yours and you’re quite convinced the plan would never work. It’s just science, right?

So you jump on to the next idea with hopes that you will find a magical idea that is as great as the first one, but also easy to implement. And you make sure to let your friends know when you’ve found the new idea. That way you don’t look like a loser.

The human brain is a scary place, isn’t it?

Trust me when I say that this cycle of coming up with an idea, sabotaging yourself, and moving on quickly can continue for a long time. It can continue forever. So what’s the solution to this self-destructive cycle that’s leaving all of our ambitions half-baked? How do we get to that true Nike state of mind and just do it for once?

I call it the 70 percent solution. It’s actually pretty simple.

The core idea behind the 70 percent solution is that you should always trade perfection for completion when you are in the beginning stages of developing your idea. It is better to have work that you are only 70 percent percent satisfied with as long as you are committed to putting 100 percent of it out there, regardless of how you feel.

The notion that before you can begin you have to actually understand everything you are doing is inaccurate. The only thing that every completed projected has in common is that somebody began it. This means that you are going to make a ton of mistakes. There will be moments of face-palm. There will be a ton of frustration. But no matter what, your work will be out there.

If you want to start a freelance business online, but have no idea what you should do, use the magic of Google to do some brainstorming, then go out and try to get a client. Who cares if you fail? At least you did something.

If you want to start writing, but you’re concerned that nobody will read your work, stop worrying. Just write. Do the work.

What most of us with the entrepreneurial spirit don’t realize is that we will never be satisfied. Our greatest efforts will seldom be enough in our eyes. Even when we do accomplish something, we will immediately be looking for the next rush of excitement in another endeavor.

With that in mind, we are free to act without the fear of failure. We can accept imperfection initially because we know that even if what we do is not up to par in the beginning, our OCD will probably have us working day and night to perfect it later.

So go forth. Make your priority completion. Do whatever it takes just to finish.

Put yourself out there and adjust what you’ve done once you get some feedback. When you see the progress you’ve made, you’ll be happy that you did. 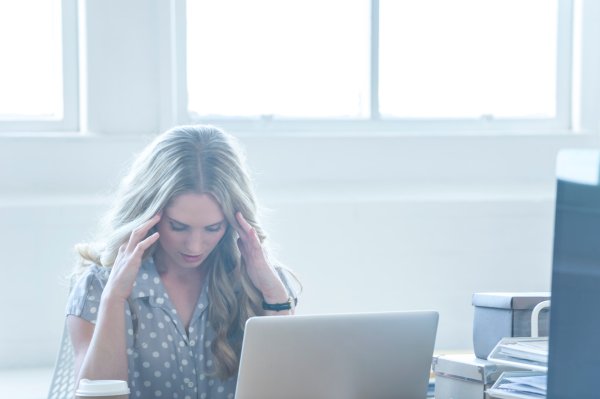 5 Ways to Handle Criticism at Work
Next Up: Editor's Pick