Mary Ellen Fuller is the daughter of Cold War attorney and negotiator James B. Donovan, whose role in the trial and exchange of spies is the subject of the Steven Spielberg film Bridge of Spies.

History is remarkable. One thinks it belongs to the world for viewing and ownership, but it can be so very personal.

James B. Donovan served as general counsel of the Office of Strategic Services during World War II and presented visual evidence as the associate prosecutor of the Nuremberg Trials. He stood as the defense counsel for a Russian spy, Rudolf Abel, captured in the U.S. and negotiated the spy’s exchange for the captured U-2 pilot, Francis Gary Powers, who was imprisoned in Russia. He negotiated with Fidel Castro during the Cuban missile crisis for the release of the Bay of Pigs prisoners captured and imprisoned on the Isle of Palms in Cuba. At the same time, he ran for the U.S. Senate in New York against Jacob Javits. He served as president of the Board of Education in New York City during the integration busing issues and died as president of Pratt Institute during the turbulent student uprisings. He was just 53 years old.

He was also my father.

I lived history each day because of my dad. He taught me to fight the good fight no matter the outcome. He loved his country, believed in the importance of public service, and used the art of negotiation as his weapon of choice. He felt that a person simply wants to be respectfully heard, and that it is only when you listen well that you can reach the most just results. History taught him that, and we could stand to use this weapon today.

A lawyer or the average person must defend the rights of a person’s beliefs even when they do not agree with them. They should talk it out with aggressors and meet with them to find out what they truly want. Such action dissipates intractable positions rather quickly. Jim Donovan loved the lines of a 13th century Persian poet: “Out beyond ideas of wrong doings and right doings, there is a field. I will meet you there.”

That is how I will always remember my father—a man of just compassion who understood the gravity of his actions, whether he was crossing Check Point Charlie in Berlin, bargaining in Cuba with Fidel Castro, or helping me with my homework.

He had tenacity and believed in the strength of advocacy and the law. I am humbled because I have spent years with a quiet connection to his national and world exploits. I grew up thinking all fathers had done these simple things.

My father’s den in our home was an axis for all his private discussions and late night ruminations, where I was permitted to bring a glass of sherry to the world-famous. He loved an 8-year-old’s drawing of Rudolf Abel in black and white stripes with a ball and chain, yet would speak of his intelligence and how they had to connect for his defense trial. Castro would call the house at the same time as his Senate campaign manager. I traversed through varying picket lines to get to school and learned to ignore hurled shouts of “Commie Lover” with a cheery wave as my reply. All of this seemed like quite an ordinary day in our home.

Several years ago, I had the honor of going to Miami to celebrate 50 years since the release of the Bay of Pigs Brigade prisoners. All these years later, they now expressed their love to me directly for my father’s belief in this effort. Individuals came up and clasped my hands, told me they loved America and what it stands for, and that they prayed each day for my father. I was humbled yet again. Even though he died 45 years ago, he was still teaching me the long lasting effects of fighting for a just cause.

Recent events have brought all of these memories into focus. The world today is more strident and unbendable, so we need to revert and study important behaviors and the outcomes of past crises to bring some flexibility to our intolerance.

Mary Ellen Fuller is the daughter of Cold War attorney and negotiator James B. Donovan, whose role in the trial and exchange of spies is the subject of the Steven Spielberg film Bridge of Spies. Donovan’s memoir Strangers on a Bridge the first-hand account of the same historical events has just been re-issued by Scribner. 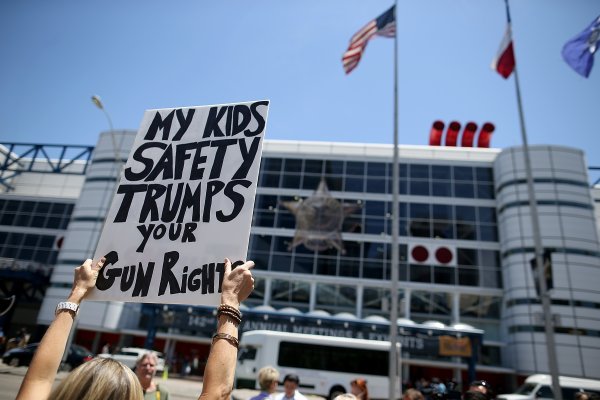 I'm Getting Death Threats for Protesting Guns With Sex Toys
Next Up: Editor's Pick