Season 19 Mirrorball Champion, Alfonso Ribeiro, returned to the ballroom for a special TV Night themed episode of "Dancing with the Stars" LIVE on Sept. 28 on the ABC Television Network.
Adam Taylor—ABC
By Melissa Locker

Welcome back to Dancing with the Stars where the pants are tight, the tans are glowing, and the waterproof mascara is extra strong. Tonight it’s the show’s annual interpretive dance down memory lane. While the show’s theme is ostensibly the most “memorable year” in reality it has been a way for the stars to remind fans of their greatest success or their most tragic back story and sometimes both. Alfonso Ribeiro continued his slow motion hostile takeover of the show by stepping in for Tom Bergeron, who was off for a family emergency.

Alexa PenaVega and Mark Ballas: Alexa opted to commemorate the year 2000, which is when she signed on to Spy Kids and her single mother rejoiced to have another breadwinner in the family. She dressed up like a sexy librarian and danced a foxtrot to “Mama Said” by The Shirelles. The judges applauded the theatricality of the routine, which had more plot than the last Fast & Furious movie, but noted that she had a few missteps. 21/30

Gary Busey and Anna Trebunskaya: Gary chose to remind the world that he is an Academy Award nominated actor for his role in The Buddy Holly Story. The producers decided to remind the world that Gary suffered a traumatic brain injury after a motorcycle accident (wear your helmets, kids!) But since even the powers that be at Dancing with the Stars probably agreed that a motorcycle accident would make a terrible dance, Gary hit the floor for a jazz routine to Buddy Holly’s “That’ll Be the Day.” 16/30

Best Moment Ever: Bruno Tonioli admitted that his most memorable year was way back in 1983 when he appeared in Elton John’s “I’m Still Standing” video in nothing but black underwear, a studded belt, and a chauffeur’s cap.

Tamar Braxton and Valentin Chmerkovskiy: Tamar chose to commemorate 2012, the year her husband almost died and while he was in the hospital being treated for multiple blood clots, they decided to have a kid. She cried as she recounted her blessings, including the blessing of being able to dance a rumba to her own song, “King,” on Dancing with the Stars. Royalties are always a blessing. Carrie Ann Inaba couldn’t choke back the tears, declaring, “You reached into my soul!” 27/30

Hayes Grier and Emma Slater: For the social media star, the most memorable year was 2014, which surprisingly was not the year he was born. Instead it’s when his first video went viral (kids these days!). His contemporary routine to “Stitches” by Shawn Mendes was good, but it’s unclear how exactly it related to online success and teenage idol status unless he plans to turn it into a Vine later. The routine was good enough that Bruno’s jaw dropped and he could only gasp, “What was that?!” 27/30

Julianne Hough’s Most Memorable Year: 2007, the year she started on Dancing with the Stars and won the Mirror Ball straight out of the gate.

Alek Skarlatos and Lindsay Arnold: Alek’s most memorable year so far has been 2015, which started when he and his friends stopped a gunman on a French train. But his year continued to be marked by violence as Alek is a student at Umpqua College in Oregon, where a gunman killed numerous students last week. Alek would have been at the school if it wasn’t for his rehearsal with Dancing with the Stars. To mark the year, Alek opted to do his paso dobles to “Wake Me Up” by Avicii. The judges were in the unhappy position of having to critique his routine while he was still reeling from tragedy. 24/30

Nick Carter and Sharna Burgess: Nick chose to commemorate 1992, the year he joined the Backstreet Boys and, of course, all the Boys came out to help him take that trip down memory lane. A.J. McLean even came to teach Sharna the Official Backstreet Dance Moves™. In case you wondered what style of dance is most appropriate for a routine set to “Everybody (Backstreet’s Back)” apparently it’s “jazz.” Carrie Ann announced that while Nick was great as a Backstreet Boy, he’s even better now that he’s had some ballroom training. Julianne just held up a sign that read “I Love Nick.” There was so much fan girling going on at the judges’ table that it made you long for grumpy old judge Len Goodman. 27/30

Carlos PenaVega and Witney Carson: The pressure of the Big Time Rush tour in 2012 was too much for Carlos so he started smoking pot, and the only thing that saved him was going to church. He met his wife Alexa at bible study and turned his life around. Carlos danced a waltz to “Amazing Grace” sung by the DWTS house band, Ray Chew Live. As Alexa cried her eyes out and Carlos took a moment, Julianne bluntly pointed out that he was in the middle of the pack and would be until he moved his shoulders differently. Um, let the man wipe his tears away first, Julianne! 25/30

Carrie Ann Inaba’s Most Memorable Year: In 1993, Carrie Ann toured the world with Madonna and her life has never been the same.

Paula Deen and Louis van Amstel: Paula had many memorable years (like when she was hit in the face by a ham! or got sued for racial discrimination!) but chose to commemorate 1989, which was the year she left her husband and started her own business. She danced a cha cha to “Respect” by Aretha Franklin and it was marginally better than last week. Still, Julianne couldn’t help but climb out of her seat to remind Paula that she had overcome “so much adversity” (is that we’re calling it now?) and was “awesome.” 18/30

Andy Grammer and Allison Holker: Andy’s most memorable year was 2009, the year his mother passed away from breast cancer and the song he wrote in sorrow kick-started his music career. He danced a cha cha to his own song “Good to be Alive”. Carrie Ann thought it was disjointed, but Julianne thought it was the most comfortable he’d been since Week 1, Bruno forgot to watch so gave him an 8. 23/30

Bindi Irwin and Derek Hough: Bindi is determined to make every Gen Yer cry by commemorating 2006, the year her father Crocodile Hunter Steve Irwin died. To mark the solemn moment, she performed a contemporary routine to “Every Breath You Take” by Aaron Krause with Derek incongruously stepping into the role of her dad. She cried in Derek’s arms at the end of the routine while her mother and little brother looked on sadly from the sidelines. 28/30

In Jeopardy: Carlos and Witney; Gary and Anna

Who Went Home: Gary Busey just couldn’t muster the votes, perhaps because his particular demographic doesn’t know they have telephones. (Just guessing!) “The fact that I’ve been eliminated is false,” said Gary, “because my spirit will remain in this room for the show.”

The Leaderboard: Bindi is in the lead with a three-way tie for second between Hayes, Tamar, and Nick Carter. Paula Deen is in last place. 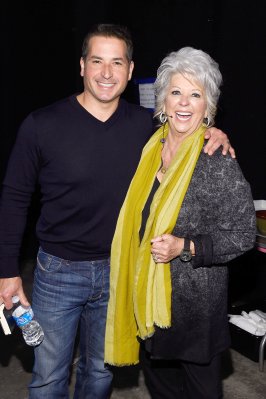