Why Amber Rose’s SlutWalk Was for Everyone — Even Prudes

On Saturday, thousands of people swarmed downtown Los Angeles in the 80-degree sun with signs, glitter, flags and t-shirts — or, as was the case with some women, no shirts at all. The solidarity was palpable and the energy electric but this was no 5K fundraiser or Donald Trump for President rally. No, these people of all ages, races, genders and various states of undress gathered for an event called Amber Rose’s SlutWalk. And I, goody-two-shoes wife and churchgoer — was a proud supporter.

If that sounds in any way surprising or deviant — as I am sure it does to many — you probably don’t know what a SlutWalk actually is.

In 2011, a Toronto police officer was speaking at a university on the topic of campus rape when he said the following: “Women should avoid dressing like sluts in order not to be victimized.” The implication that women are responsible for or deserving of their own assault because of how they dressed or were perceived by men outraged many, including Sonya Barnett and Heather Jarvis. The two women organized a rally that April, protesting the culture that labels, shames and blames women for sexual assault. And with that the international SlutWalk movement was born. They hold rallies year round, all over the globe.

Which brings us to Saturday’s event and its host: model, author and famous rapper paramour Amber Rose. For those who don’t know, Rose was first introduced to the mainstream in 2008 as Kanye West’s strikingly beautiful girlfriend; an enigma with an hourglass figure, sunglasses and a signature blonde, nearly bald hairstyle. The video vixen and former stripper went on to marry and divorce rapper Wiz Khalifa, have an adorable child, and parlay her exposure into her own unique pop-culture brand.

But her journey hasn’t been without a hefty helping of public shaming, as she referenced during a heartfelt and tear-filled speech on Saturday. Rose told the SlutWalk crowd about having been “slut-shamed” since she was 14 years old.

From her most famous ex saying on national radio that he had to “take 30 showers” after dating her, to the online outrage after she, a wife and mother, released a twerk video that pretty much broke the Internet last year, the world can’t get enough of judging Rose. But she hasn’t taken the criticism passively. She has repeatedly spoken out about the double standards that try to force her into the narrow boxes of propriety and label her a slut, all while celebrating men for their sexual conquests.

Sexual being? Mother? A model who not only didn’t lose her baby weight but also does not care? Yes to all of the above. Rose made a decision early on that she was going to be all of the things, unapologetically and at the same time. For those reasons, I have always loved Ms. Rose, despite the fact that at first glance, she and I couldn’t be more different.

I grew up in the suburbs of Washington D.C.: a pastor’s kid; the church-on-Sunday, prayer-on-Tuesday, choir-rehearsal-on-Thursday kind of kid. And I followed all the rules. In fact, I didn’t just follow them. I believed in them gladly and wholeheartedly. Which mean that among my friends, I was the odd one out. I didn’t curse, didn’t drink, didn’t go clubbing and, the biggie: I didn’t have sex. I was the princess of purity and had a chastity ring given to me by my parents to prove it. Seriously.

Fortunately I didn’t have the chronic disease of social awkwardness or obnoxiousness that a lot of super religious kids suffer from, so my peers weren’t particularly bothered by my lifestyle choices.

Celibacy still worked for me then and was a choice that I continued to make, much to my friends’ surprise. But apparently my choice began to bother everyone else. While abstinence has long been held up as some cultural and religious ideal, it also caused me to be perceived as a prude, a pariah. Oftentimes the word virgin was hurled at me with as much judgment as the word slut was wielded towards some of my peers.

People assumed things about me — my relationship with my body, my intelligence, my street smarts, my taste, my politics — that had absolutely no basis in fact. Even those who “approved” spoke to me with an odd and unacceptable level of intimacy, once again assuming that they knew everything they needed to know about me based on one piece of information about my sexuality.

Rose and many of the women who have participated in SlutWalks all over the world have felt those feelings too. They know what it is like to be judged based solely on choices that they have made with their own body — how they clothe it, what it looks like, and what they have — or have not — chosen to do with it.

In that way, our experiences are a lot alike — with one major exception: my choices never made me feel unsafe. The stigma around my sexual choice was never used as a reason to treat me poorly, disrespect me in relationships, or invite unwanted physical attention. Nor was it used as justification for violence of any kind.

Some might say “Well that’s exactly why you shouldn’t be a slut!”

Wrong. The decisions that any of us make about our bodies and sexuality should never be based in fear of abuse or judgment.

That is what the SlutWalk is all about. And that is why I, former “prude,” Christian married lady who still wears a cover up at the beach, was proud to be on the sidelines, cheering and supporting Rose and all of the walkers who decided that Saturday was a perfect day to use their power, own their stories, and publicly own their right to do both.

Who could disagree with that?

Erica Williams Simon is a strategist, cultural critic, speaker and media maker. Her work focuses on communicating the personal values, ideas and habits that lead to radical social impact. She is a deputy editor for Upworthy.com and a World Economic Forum Global Shaper. Follow her @createdbyerica

An earlier version of this story incorrectly reported a specific figure for the number of participants in the SlutWalk. A specific count was not available. 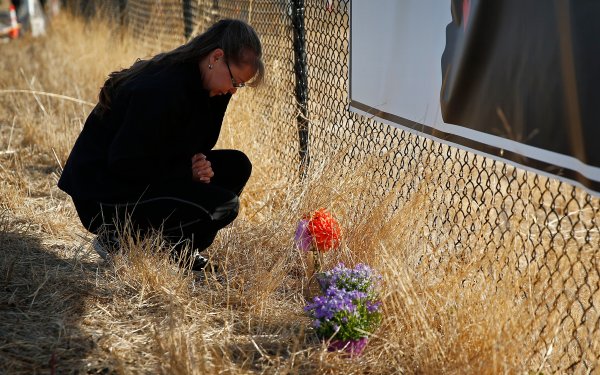 How Christians Should Respond to Being a Target of Shooters
Next Up: Editor's Pick