Caracas homemaker Anny Valero scoured three state-run supermarkets one recent afternoon but failed to find meat, chicken, milk, rice or pasta. The final insult came when she tried to buy three cans of sardines and was ordered to put one back due to food rationing. Heading home nearly empty-handed, she grumbled: “This is a disaster.”A growing number of Venezuelans share her dismay. Amid food shortages, galloping crime and inflation that could top 150% this year, polls show swelling support for the country’s political opposition which could win a majority in the Dec. 6 legislative elections.

Should that happen it would be a first major breakthrough for the opposition, which has lost nearly every local and national election since the late Hugo Chavez ushered in Venezuela’s socialist revolution in 1999. It would break the power monopoly of the ruling Socialist Party, which controls the judiciary, the legislature and government watchdog agencies — all of which answer to President Nicolas Maduro. And it would open the door for a recall referendum to remove Maduro from power.

After nationwide street protests last year led to a government crackdown and zero reforms, “many Venezuelans are now looking for an electoral solution,” says Inti Rodriguez of Provea, a Caracas-based human rights group .

Venezuela’s economic crisis is the product of falling prices for oil – the country’s main export – socialist policies that have led to plummeting national production, and government corruption. The problems started under Chavez, who died of cancer in 2013, but have accelerated under Maduro, a former bus driver, labor organizer and foreign minister who lacks the charisma of his predecessor.

“No Socialist Party candidates want Maduro to visit their states because that would be the kiss of death,” says Jesus Torrealba, spokesman for the opposition coalition known as the Democratic Unity Roundtable.

During the 2010 legislative balloting, the opposition won more votes than pro-government candidates but not a majority of seats due to the design of the voting districts. As in that election, state workers are now being pressured to vote for ruling party candidates who also count on government financing and a propaganda boost via the many TV and radio stations controlled by the government.

Pollster Luis Vicente Leon said that over 16 years in power, first Chavez and now Maduro have mastered the electoral arts. “They fiercely control the institutions and the money which allow them to become stronger through electoral engineering even when their support is flagging,” Leon wrote in the Caracas daily El Universal.

Maduro has also proved a master of finding scapegoats for his country’s woes. He is now blaming the country’s shortages on smugglers who take cheap Venezuelan food, gasoline and other items into Colombia and sell them for huge profits. In August, Maduro closed Venezuela’s border with Colombia and declared a state of emergency along the frontier that also includes restrictions on political activities.

Colombian “mafias backed by paramilitaries are coming over and buying entire harvests,” Maduro said last week. “That’s why the border must remain closed.”

But smuggling mafias have always existed along the border. These days, the incentive to smuggle is even higher due to Venezuela’s artificially low prices and collapsing currency and there have been widespread accusations that both Colombian and Venezuelan police and military officials are deeply involved.

However, Maduro’s argument – which is drilled into people’s heads by state-run media – has convinced some some Venezuelans.

Colombians “take our gasoline, our medicine and food,” says Francy Bloisse, a retired Caracas lawyer. “I think Maduro did good work” by closing the border.

Another problem is that opposition leaders remain divided on strategy and out of touch with poor and working class voters who form the backbone support for Chavez and now Maduro. In other cases, its leaders have been sidelined by judicial fiat.

Last month, a judge sentenced Leopoldo Lopez, the opposition’s most charismatic politician, to nearly 14 years in jail for his role in last year’s protests in which 43 people were killed. The U.N. Working Group on Arbitrary Detention has called for the immediate release of Lopez, saying his trial was “conducted behind closed doors and marked by serious irregularities.” Several other leaders, including Caracas Mayor Antonio Ledezma, have been jailed or stripped of their political rights by kangaroo courts.

Even so opposition candidates are expected to win a majority of the 164 seats. Yet their power would be limited. Political analyst Carlos Romero says that before new deputies take the oath of office in January, the outgoing Maduro-controlled National Assembly could renew the extraordinary powers that have allowed the president to rule by decree since March. New laws that challenge government authority could be thrown out by judges loyal to Maduro.

Victory on Dec. 6, Romero says, “is important for the opposition in political terms but it’s not going to change the course of the country.”

Meanwhile, average Venezuelans are spending more and more time searching for basic staples. Caracas labor activist Froilan Barrios claims Venezuelan employees now miss between 20% and 40% of their work hours because they must look for groceries.

For Valero, the homemaker, the task brutally interrupts her family’s routine. During her recent grocery run, her auto-mechanic husband took the day off to care for their six-month-old boy as Valero stood in store lines. Their two daughters, aged, 7 and 9, skipped school and stayed home alone watching TV because Valero didn’t think she would finish on time to pick them up after class.

All that for two cans of sardines. 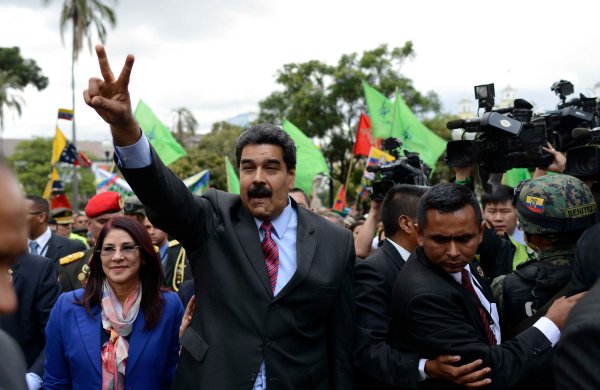 Colombia and Venezuela Agree to Normalize Relations
Next Up: Editor's Pick