In the wake of the mass shooting in Oregon, Last Week Tonight used its platform to address mental illness, which John Oliver defines as “the thing actors pretend to have in order to win Oscars.”

According to Oliver, mental illness is not usually addressed in this country—even by television doctors like Doctor Oz or Dr. Phil—until it comes up in the context of a mass shooting. Oliver thinks the correlation is nonsensical since the vast majority of people with mental illness are not violent and the vast majority of violent gun owners aren’t mentally ill. Still, he was more than happy to discuss an issue faced by an estimated 43.8 million American adults.

Oliver pointed out that state and federal governments generally fail to prioritize mental health in their communities, opting for practices like “Greyhound therapy,” which does not involve a dog that is “98% bone and gristle,” but instead involves sticking mentally ill patients on a Greyhound bus to another state. According to Oliver one of the most common places for people with mental illness end up is prison, which is expensive, ineffective, and dangerous.

Oliver argues that the entire system needs a massive overhaul and since mental health is dominating the news cycle right now, it might be a good time to come up with a strategy. After all, according to Oliver, “If we’re going to constantly use mentally ill people to dodge conversations about gun control, the least we owe them is a f—ing plan.” 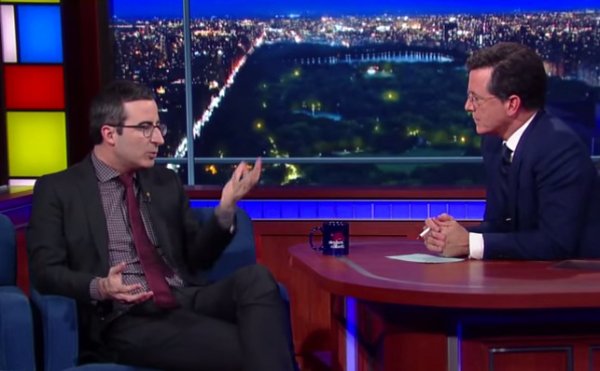 John Oliver Gets Real on How Little He Cares About Donald Trump
Next Up: Editor's Pick