At 3% in national polls, Mike Huckabee faces an uphill fight against more than dozen Republican candidates for the presidential nomination. But that hasn’t stopped him from adding another opponent in recent weeks: a bag of rainbow-colored chips.

Even if the the chips are out of stock, the fury of former Arkansas Governor Mike Huckabee and his allies has not faded. To them, Rainbow Doritos are just the latest example of corporate pandering to a gay-friendly agenda. In a letter to Frito-Lay management, Huckabee urged them to sever ties with the It Gets Better Project because he said its creator, sex columnist Dan Savage, has a history of anti-Christian comments. Huckabee wrote that “it is beyond me to understand how a responsible corporation would think that partnering with someone who spews the vicious vitriol that Savage does would be worthy of your corporate contributions,” according to a copy of the letter obtained by the blog WND. Huckabee declined to be interviewed for this article.

“It’s a war of ideology,” says David Lane, head of the American Renewal Project, a group that politically mobilizes evangelical pastors, who is supporting Huckabee’s effort. “Frito-Lay has stepped into a cultural war.” For years, Huckabee has been a regular speaker at Lane events, and a host of overseas trips for pastors organized by Lane.

Frito-Lay maintains the partnership is purely to fight bullying, and lamented in a statement that “some have chosen to misrepresent the positive intent behind Doritos Rainbows.” But Huckabee and his allies aren’t buying it. “This is a battle for the soul of America,” Lane continues. “And religious freedom created America.”

When it became clear that Frito-Lay would not back down, Huckabee and Lane called on Christians to boycott all snacks made by the company in order to protest the perceived connection to Savage, whom they call an “anti-Christian bully.” In a letter to over 100,000 pastors, Lane wrote that “tolerance for Frito-Lay’s brazen corporate support of hate speech by Dan Savage— that were it directed toward Muslims, would warrant a Justice Department investigation and prosecution— is chipping away at the very character and soul of the American experience.”

Savage is no longer actively affiliated with the It Gets Better Project, but he did start the idea of It Gets Better, a series of videos by prominent people assuring LGBT youth that if they’re being bullied, it won’t last forever. The idea is to comfort LGBT teens who may be contemplating suicide because of bullying or isolation. “It’s hilarious to read that ‘we’re gonna boycott Doritos,’” Savage says. “Michelle Obama’s probably going to call to thank me for getting so many right wing nuts to give up snacks. Maybe they’ll be a little thinner.”

For Huckabee, the Frito-Lay boycott is a continuation of his support of Christians who fight against gay marriage on religious grounds, like Kentucky clerk Kim Davis, whom he publicly supported after she was released from jail for refusing to issue marriage licenses to gay couples. It’s a move designed to appeal to the Evangelicals on the far right who oppose gay marriage even after the Supreme Court decision this summer, and want to do everything they can to fight it. That’s why they’re going on the offensive against Dan Savage.

Even though Savage isn’t on the board or the staff of the current foundation, he’s Public Enemy Number One for many opponents of gay marriage, because of his public advocacy for gay rights and his often inflammatory comments about Christianity. He drew particular ire from the evangelical movement for a 2012 speech he gave to a high-school journalism conference about the flaws in the Bible, in which he mocked some Christian students who walked out of his talk. He apologized for his comments shortly afterwards. “He took advantage of high school kids at a conference and bullied them by taking on their belief in the Bible,” Lane says. “He’s a bigot, actually.”

Savage shrugs off the notion that the anti-bullying advocate is somehow the “real” bully, calling it “right out of the Karl Rove playbook.” But he does think the It Gets Better project is particularly irksome to evangelicals because it speaks directly to kids who feel isolated for being gay, which are often kids with conservative or religious parents. “The kids who it really is directed at are the kids with right-wing fundamentalist Christian parents,” he says. “They know that the kids we’re talking to are their gay kids, and their trans kids, and their lesbian kids, and their bi kids, and they don’t like it.”

Savage says the backlash to the LGBT Doritos is a perfect analogy for a general attitude towards gay rights. “I don’t see how a gay bag of chips limits anyone else’s religious freedom,” he says. “You don’t have a right to live in a world without bags of gay chips, and it doesn’t infringe on anyone’s private beliefs or practices if there’s a bag of gay chips out there.

Savage says that regardless of your opinions on gay marriage, Mike Huckabee probably has bigger fish to fry.”The campaign is already over, the chips are done, and Mike Huckabee is out there shaking his flabby fist at it,” he says. “Doesn’t he have more important things to talk about if he’s seriously running for president than that gay bag of chips?” 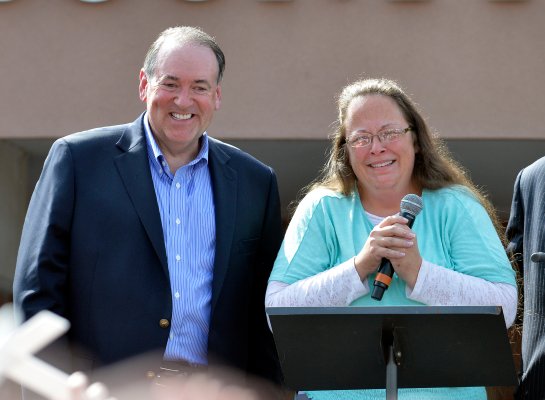