A Guadalupe fur seal pup, wasted away to nearly fur and bones, washed up on the shore’s of California’s Humboldt County in April. He was spotted and whisked to the Bay Area’s Marine Mammal Center, soon to be named Ian and become the first juvenile of his species to ever wear a satellite tag. But his odds of seeing the ocean again after doctors tried to rehabilitate him, like dozens of other fur seal pups mysteriously turning up on California shores, were grim.

The appearance of these pups, many of whom are already dead by the time they wash to shore, has led the National Oceanic and Atmospheric Administration to declare what is known as a UME—an unusual mortality event. So far in 2015, roughly 80 of them have been found stranded, a rate eight times higher than normal. Especially alarming for marine biologists is that, unlike sea lion pups that are experiencing their own bizarre strandings, the Guadalupe fur seals are listed as threatened under the Endangered Species Act, with some 15,000 estimated to exist in the world.

“This is an alarm bell ringing,” says the Marine Mammal Center’s Jeff Boehm, whose team of doctors and intrepid volunteers have successfully rehabilitated 11 Guadalupe fur seal pups out of the 33 who have arrived at their door. (The other five of 38 who have been found alive went to Sea World for care.) When the pups arrived, they’re often starved nearly to death, some with organs and critical systems on the verge of shutting down. “Once we see them on the beach, they’re critically ill,” Boehm says, often proving their efforts to be “too little, too late.”

Like an animal emergency, the UME declaration allows NOAA to dedicate more resources to trying to figure out why this is happening. Officials and experts like Boehm have theorized that, due to weather conditions that have made the Pacific waters unusually warm, mother seals and sea lions have been forced to forage much farther than normal to find food for themselves and their young. Some pups are left for such long stretches that they appear to be risking their safety, venturing into the open ocean before they have the strength or nourishment they need to survive.

“They may be prematurely weaned or abandoned,” Boehm says, “finding themselves in water without physical reserves or behavioral maturity.” He and other experts are watching the development of an El Nino without knowing what it will mean for the marine life off California’s coast.

Though he weighed less than 40 lbs. when he arrived at the Marine Mammal Center, Ian proved to be a survivor. The team fed him “fish mash” through a tube before teaching him to eat whole fish and caretakers said he proved “feisty” throughout his stay, exhibiting the temperament of a normal Guadalupe fur seal. In a few months, Ian weighed 90 lbs. and the Center took him to Point Reyes National Seashore, where they happily ushered the seal back into the wild.

Even though the 40-year-old marine animal hospital has had a record-breaking number of “patients” this year, Boehm says the successes help keep them ready for whatever the weather brings. “Every species warrants our attention,” he says, noting that threatened species like the Guadalupe fur seals and Hawaiian monk seals they’re working to rescue at a new mammal hospital all demand significant resources.

Could they go extinct? “Not on our watch,” he says. 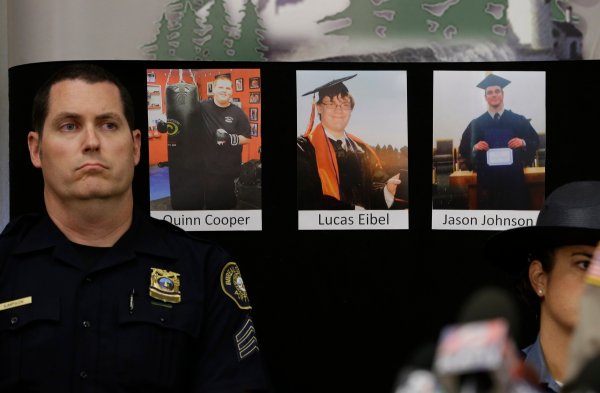 Relatives Mourn Oregon Shooting Victims: 'Our Lives Are Shattered Beyond Repair'
Next Up: Editor's Pick