Hillary Clinton Promises to Confront the NRA Over Gun Laws

Hillary Clinton delivered harsh criticism of the National Rifle Association and Republicans in Congress on Friday in the wake of the deadly Oregon mass shooting, calling for a “national movement” to fight the gun lobby in the United States.

In fiery remarks delivered at Broward College in Davie, Florida, Clinton lambasted the NRA and vowed to take on the gun lobby as president.

“What is wrong with us, that we cannot stand up to the NRA and the gun lobby, and the gun manufacturers they represent?” a visibly angry Clinton said. “This is not just tragic. We don’t just need to pray for people. We need to act and we need to build a movement. It’s infuriating.”

Clinton refrained just a day earlier on the eve of the Oregon shooting from harshly critiquing the NRA, and called on Thursday for stricter gun control measures.

But she used her remarks on Friday to go on the attack, calling out Republicans for blocking background checks and other measures in Congress. “Republicans keep refusing to do anything to protect our communities. They put the NRA ahead of American families,” Clinton said.

A mass shooting at a community college in Oregon on Thursday left 10 people dead and seven wounded. The 26-year-old gunman had 6 weapons during the attack and wore body armor.

The shooting has reignited a debate over gun laws in the United States, with most Republicans arguing that guns help keep Americans safe, calling instead for better mental health programs. John Kasich said he considers the death penalty an important check on mass shootings and Donald Trump saying the shooting was “horrible.” Democrats largely argue for stricter checks on the proliferation of weapons.

The NRA has not yet commented on the shooting, but the conservative gun rights group Gun Owners of America accused some of politicizing the shooting, and said on its Facebook page that the Oregon shooter “chose a #GunFreeZone because it was ‘an easy target.'”

There are about 310 million civilian guns in the United States, according to a 2012 Congressional Research Service report, and somewhere between one-third and one-half of households have guns. The United States has the highest rate of gun ownership in the world and the highest homicide by firearm rate among developed countries. It ranks around 100th worldwide in overall homicides.

Clinton has called for universal background checks and closing loopholes that make it possible for gun buyers to purchase weapons without a background check online and at gun shows. She supported the Brady Bill, which established background checks for handguns and was passed by her husband Bill Clinton.

Her chief rival for the Democratic nomination, Vermont Sen. Bernie Sanders, voted against the Brady Bill, but does support some gun control measures. “I will as your president never relent on trying to work on this, but we need a national movement,” Clinton said.

She also conceded that gun lobbies had won important battles even while arguing that most Americans want stricter gun control measures. A 2013 Gallup poll showed that 65% of Americans support expanding background checks for gun purchases, though polls show a majority of Americans are opposed to “gun control.”

“I don’t think they represent a majority of Americans or a majority of gun owners. They count on having a really intense dedicated group saying to politicians, ‘we will vote against you,'” Clinton said. “We’re not single-minded voters but each us of has to care about this issue. We’re going to take them on. We took them on in the 1990s and we’re going to take them on again.”

In his comments last night, President Obama obliquely mentioned the NRA by calling on American gun owners to reconsider “the organization that suggests it is speaking for you,” but refrained from naming the gun lobby directly.

Clinton’s decision to attack the NRA directly will likely be popular among the Democratic base, particularly those who are reticent of Sanders’ more moderate views. (He has been given an “F” rating by the NRA.)

Florida, where Clinton delivered her speech, lands squarely in the middle of the Democratic nominating primary, two weeks after Super Tuesday, when Clinton allies hope the Democratic frontrunner will sweep up enough delegates to make the nomination a sure shot. But it’s also a key general election swing state, home to two of the more formidable contenders for the Republican nomination both former Florida Gov. Jeb Bush and Sen. Marco Rubio. Clinton has been to the state several times.

During her last campaign trip to Florida in late July, Clinton laid out a plan to strengthen relations with Cuba and build of President Obama’s move earlier this year opening up discussions with with the isolated island nation.

Florida is a bellwether of her appeal among Hispanic voters, a key voting bloc in the Democratic primary she will likely need to win the the nomination. Clinton’s event in Florida comes the same day that Sanders announced the hire of a director of Hispanic outreach. 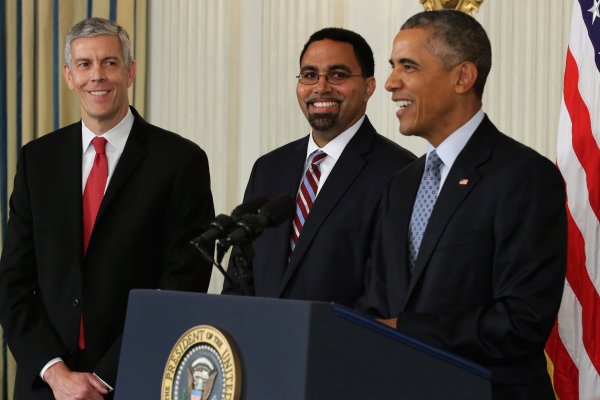 Obama Thanks Outgoing Education Secretary
Next Up: Editor's Pick