Why World Leaders Are Starting to Eat Garbage

When it comes to tackling climate change, one of the greatest challenges we face is understanding the myriad factors that influence our warming planet. Addressing some while ignoring others will only allow the mercury to continue to rise. And while threats like carbon pollution and environmental degradation feature prominently into any discussion about solving this crisis—and rightfully so—there’s still at least one significant factor that remains noticeably absent from our discourse: food.

Wasted food in particular, and there’s a lot of it. Globally, nearly 30% of all agricultural land produces food that is ultimately lost or wasted. That’s more than 1.3 billion metric tons of edible food—a sizable slab of the roughly 6 billion tons of total global agricultural production for both food and non-food use.

Waste appears throughout the supply chain, from produce damaged at farms to retail packages that don’t properly store food, to our very own eating habits that lead us to discard food before it has passed its prime. And when this food goes uneaten, we waste the water and energy needed to produce it, harvest it and bring it to market. We allow for unnecessary nitrous oxide emissions from the fertilizer used to grow crops, and then we dump the wasted food into a landfill where it emits methane gas.

The carbon footprint this all leaves is staggering: 3.3 billion tons of greenhouse gas emissions, or about 7% of total global emissions. That’s a lot of carbon. In fact, if “food waste” were a nation, it’d be one of the largest emitters globally, outranked only by China and the U.S.

Beyond the obvious environmental impacts, the socio-economic consequences are equally disastrous. Direct economic losses from wasted food total $750 billion annually, according to the Food and Agriculture Organization of the U.N. That hits the pocketbook of every single American, with an average cost per person in this country of $640 worth of wasted food each year.

This is a serious problem in how we are using—or in this case, misusing—our natural resources. As about 800 million people around the world suffer from chronic hunger, food that could—and should—be eaten is going to waste.

That’s why food waste was front-and-center on the U.N.’s docket this week during the General Assembly, at a high-level luncheon hosted by Secretary General Ban Ki-moon for heads of state. And it’s why former White House Chef Sam Kass and prominent New York chef Dan Barber joined forces to cook up a delicious dinner presidents and prime ministers of spent grain, vegetable scraps, off-grade produce, cascara and nut press cake. It’s that important.

We must employ every effort to retool our food system, from better refrigeration in the developing world to a rethink of arbitrary expiration dates. Most people don’t realize that these dates are set by companies, not health agencies. The lack of federal standards leads to vast inconsistencies, and often times means food that could still be eaten ends up in the trash instead.

As if the benefits to our environment and efforts to feed the hungry aren’t reason enough to pursue these reforms, the economic opportunities they create are significant, too. The World Bank estimates that just a 1% reduction in food loss could yield gains of $40 million each year, the majority of which would go directly to small farmers growing the food, and seed into local economies across the country.

The reforms we need are entirely within reach, provided we have the political stomach, if you will, to make sure all the world’s mouths are fed. The fix is achievable. It starts with the reducing and recycling and requires a keen focus on solving the logistical challenges of getting appropriate food to those communities in need. Now it’s time to serve it up. 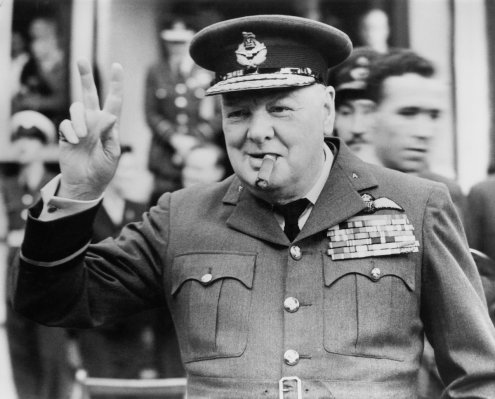 Churchill and the Reality of Politics in Wartime Britain
Next Up: Editor's Pick