Reports indicate that many of Russia’s air strikes, launched on Wednesday, have been focused on insurgent groups fighting the Syrian army instead of the Islamic State of Iraq and Greater Syria (ISIS), the BBC says.

“Carrying out indiscriminate military operations against the Syrian opposition is dangerous for Russia,” Earnest said. “It is only going to prolong the sectarian conflict inside Syria, if not make that conflict indefinite, and it also risks Russia being drawn even more deeply into that conflict.”

Russia’s Foreign Minister Sergei Lavrov had previously denied these allegations, saying that their air strikes have the same targets as the U.S.-led coalition.

Thursday’s strikes hit Homs, Hama and Idlib provinces, all in the west of the country, the BBC reports. ISIS strongholds are located in Syria’s northeastern regions.

Syrian opposition forces reported that the strikes killed many civilians, according to the BBC.

Syria’s Ambassador to Russia Riad Haddad confirmed in an interview with CNN that Russian troops are not only targeting ISIS troops, but also other rebel factions fighting Syrian army forces. “They’re all ISIS,” he told CNN’s Matthew Chance.

The BBC adds Iranian officials have expressed support of the air strikes, saying that they are “a step toward fighting terrorism and toward resolving the current crisis.” 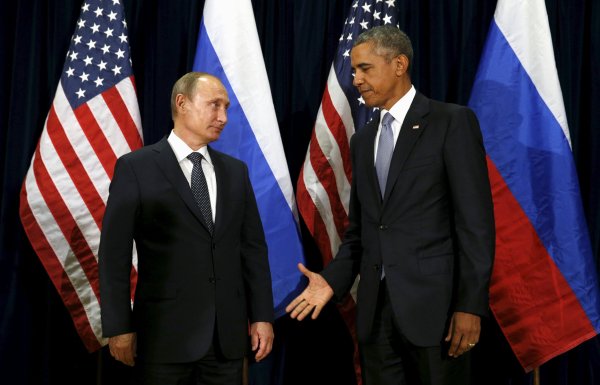 Putin Takes on Syria
Next Up: Editor's Pick