For millennia, the people of Kiribati have lived off the land, dwelling on their small islands located in the central Pacific Ocean. But over the last several decades, rising sea levels due largely to climate change have slowly eaten away at the country’s 313 square miles. Without action, the country of 102,000 people may disappear altogether over the next few decades.

Kiribati President Anote Tong has been advocating for bold action to address climate change for years, making his pleas around the world. Now, Tong says his country’s citizens won’t be able to remain on the physical islands of Kiribati much longer without drastic change on global warming. Whatever happens, his country won’t look the same in 50 years.

“We have constantly been calling the international community to do something about reducing emissions, but the reality for us is that it really does not matter,” Tong told TIME in a recent interview. “The gas is already in the atmosphere… either we leave or we spend a lot of resources to build up the islands.”

Around the world, sea levels have risen nearly 3 inches since the early 1990s due to ice melt caused by global warming. Even if countries are able to reduce emissions as much as policymakers have promised, global sea levels will still rise by one to two feet by 2100. Without carbon cuts, that rise could top three feet. In Kiribati, where land is rarely more than few feet above sea level, even a moderate rise could be catastrophic. And the island nation is also at risk from an expected increase in the number of extreme weather events, such as storms and typhoons.

Read More: Why New York City Flood Risk Is On The Rise

Tong’s plan for dealing with this is two-fold. First, he wants to fortify at least one island in the Kiribati chain so the country’s physical presence doesn’t disappear in its entirety. The president is light on details on how exactly he plans to save an island, but he says the technology exists (he has reportedly considered employing a Japanese company that has proposed engineer islands floating). The exact shape of the plans may depend on the support offered by other countries, Tong said. He’s met with representatives of the Netherlands and other flood-prone regions about how to best protect the islands.

But even if some of the country can be saved from the rising seas, Tong doesn’t expect to be able to accommodate all of the country’s residents. For those forced to leave, Tong says there must be “migration with dignity.” Last year, Kiribati purchased 5,000 acres of land in nearby Fiji as insurance policy and world leaders have indicated that they would be willing to support Kiribati refugees if it becomes necessary.

Catastrophic one-off events like hurricanes and tsunamis tend to prompt international sympathy. (Think of the $14 billion donated to relief efforts following the 2004 Indian Ocean tsunami.) Kiribati has benefited from some of that support, primarily from other Pacific island countries and development groups. But development commitments have measured in the millions, far from the hundreds of millions, if not billions Tong says his country needs to fully adapt to climate change.

Other countries have been less eager to offer support. In a moment that startled many Pacific Islanders, former Australian Prime Minister Tony Abbott was captured on tape last month laughing at a joke about how Kiribati would soon have “water lapping at [its] doors.” Australian Immigration Minister Peter Dutton, who made the off-color remark, apologized but not before Tong had earned the world’s sympathy condemning the joke as “morally irresponsible.”

Despite the attention his country’s plight has received, Tong doesn’t like to linger on the topic. Instead he emphasizes the damage caused by the policies of Australia and other developed countries that have emitted the carbon that is endangering the very existence of Kirbati, where the average resident emits less than 1 ton of carbon dioxide each year or 7% of the global average. “Climate change is not an issue that really respects any sovereignty,” he said. “If it’s a national issue, keep your emissions within your borders, which you cannot do.”

In December, negotiators from around the world will gather in Paris at a United Nations conference aimed at creating a binding agreement for countries of the world to decrease their greenhouse gas emissions. Asked about his hopes for the conference, Tong said his goal was simple: “Give us a proposition that will guarantee that our people will remain above the water.” 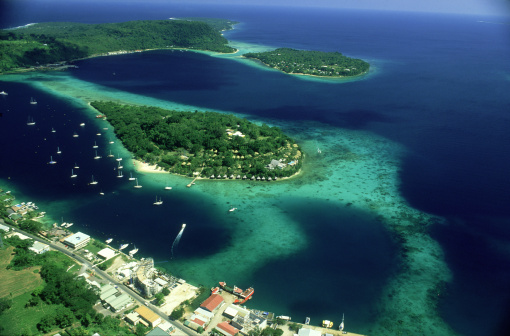