You have to give Vladimir Putin credit—he has a special talent for changing facts on the ground and daring others to do something about it. Russian bombs are now falling on Syria, though Putin’s intentions remain a subject of debate. But here’s the bottom line: Russia’s strongman has restored his country’s status as a major international player. These 5 facts explain Putin’s calculations for joining the fight for Syria.

Putin has used tough foreign policy words and deeds to boost his popularity at home from the very start. When he was first appointed prime minister in 1999, Putin had an approval rating of 31 percent, and 37 percent of Russians didn’t even know who he was. Less than a year later, his approval rating soared to 84 percent following a series of mysterious apartment bombings, which he was quick to blame on Chechen rebels. When Putin launched his five-day war against Georgia in August 2008, his popularity jumped another five points, despite the deaths of 67 Russian servicemen and an outcome of uncertain value beyond Russia’s ability to remind the neighbors who’s boss. Putin kept up the anti-Georgian propaganda for months after the conflict, helping him preserve an approval rating in the upper 70’s despite an 8 percent drop in Russian GDP over the course of 2009 as the global financial crisis sent oil prices plummeting.

Putin needs to find new ways to pump up Russian pride, because it’s been a rocky few years for the Russian economy. The most immediate culprit is that plunging oil price, which currently sits below $50 per barrel. Oil and gas sales bring in nearly 50 percent of Russia’s government revenues; they also account for 68 percent of Russia’s export proceeds. Moscow is so dependent on oil sales to keep its economy chugging along that Russia is estimated to lose $2 billion in potential sales for every dollar the price of oil drops.

Sanctions over Moscow’s invasion of Ukraine have only made things worse for the average Russian citizen. Prices have shot up 16 percent since August, the ruble has fallen 5.5 percent against the dollar, and Russia’s economy is projected to shrink 3.4 percent this year. Yet, the conflict in Ukraine, and Putin’s ability to rally public support for Russia’s approach to it, have his approval rating at 84 percent.

In the West, a leader’s popularity is closely tied to the country’s economic performance—that’s why despite all her recent political challenges, no one bats an eye when Angela Merkel’s popularity remains high, in line with Germany’s economy.

Russia is a different animal. That’s in part because 90 percent of Russians get their news from state-dominated television channels. But it’s more than that—nearly nine-in-ten (88 percent) of Russians “have confidence in Putin to do the right thing regarding world affairs”; 66 percent of Russians have a lot of confidence in Putin on that score. By framing Ukraine as a clash between Russia and the West, Putin has made the conflict into a struggle over Russian national identity. That helps explain why his approval rating jumped from 65 percent in January 2014 to 80 percent immediately after Russia grabbed Crimea.

Today, 61 percent of Russians believe there are parts of neighboring countries that really belong to Russia. Following the breakup of the Soviet Union in 1992, less than four-in-ten Russians agreed with that statement. That’s especially alarming for countries like Latvia and Estonia which have higher percentages of ethnic Russians within their borders than Ukraine has. Putin realizes that control of the Russian economy is out of his hands. So he has doubled down on things over which he has firm control: the use of Russia’s military might and the country’s sense of patriotism.

Putin has always had one overriding foreign policy goal: the creation of a “Eurasian Union” to act as a counter-weight to the European Union. But given its size and historic importance for Russia, there is no Eurasian Union without Ukraine, and until about a year ago, Ukraine looked to be orienting more toward Brussels than Moscow. Hence the Russian intervention. But the goal was never to formally annex Ukraine or any part of it beyond Crimea; it was to bankrupt Ukraine’s government in an effort to keep that country from joining the EU and NATO.

Nearly 8,000 people have lost their lives in eastern Ukraine since April 2014. More than 1 million have been displaced by the fighting, and the war is currently costing Ukraine between $5 and $10 million a day. That’s been Russia’s plan all along—to economically bleed the national government in Kiev until it capitulates to Russia’s demands to rewrite its constitution so that individual regions have veto power over national foreign and trade policies—including those that might help Ukraine slide from Russia’s orbit. Given that there are parts of eastern Ukraine that remain loyal to Moscow, it’s an insurance policy to keep Putin’s dream of the Eurasian Union alive, come what may. Russia has had to suffer Western sanctions as a result, but Putin has succeeded in drawing out the conflict toward stalemate. And the longer the conflict continues, the more money Kiev bleeds.

Which leads us to Syria. Invading Ukraine has kept Putin’s dream of the Eurasian Union alive, but it has come at quite a price—all told, the IMF believes Western sanctions could end up costing the Russian economy 9 percent of its total GDP over the next few years. But Syria offers Putin a way to mend relations with the West. Europe is currently beset by a wave of refugees fleeing Syria’s civil war, and the U.S. remains unsure about how best to tackle ISIS. Putin calculates that if Russia successfully turns the war tide against ISIS by sending in 28 fighter aircraft and 2,000 military personnel, Europeans will gladly let the sanctions against Moscow lapse in coming months, especially if it re-stabilizes the region and allows Syrian refugees to start returning home. The U.S. will be harder to crack, as it continues to refuse any solution in Syria that leaves Syrian President Bashar Assad—a close Russian ally—in power. But even that is to Putin’s benefit—standing up to the West scores him serious domestic political points. And if he is able to succeed where the U.S. failed in Syria, he may have just secured himself the Russian presidency through 2024. 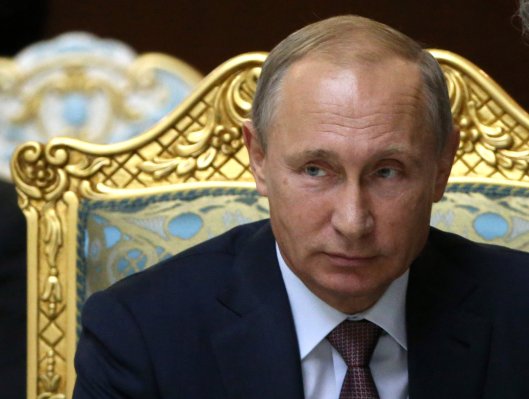 How Vladimir Putin Set the Stage for His Talks With Obama on Syria
Next Up: Editor's Pick