Major Airline CEO Starts His Tenure By Saying: ‘We Can Do Better’

The new United Continental boss Oscar Munoz has started his tenure with an apology.

He said the airline has not lived up to promises it made to its customers and employees when United Airlines and Continental Airlines agreed to merge five years ago, the Chicago Tribune reports.

Munoz took over the airline after Labor Day weekend, immediately following former CEO Jeff Smisek’s unexpected resignation amid a federal investigation. He was a board member during the merger that he now criticizes and admits that he could have been more aware about the deal, but also adds that board members are not directly involved from the day-to-day operations of a business.

He sent out an email to frequent fliers earlier this month in which he acknowledged that the airline has not lived up to expectations, adding: “We can do better.”

The airline launched a new website, UnitedAirtime.com, where customers and employees can leave feedback for United to respond to. Munoz said that the company’s main problem within the last few years has been that it has forgotten about its customers; this will show them that United is listening.

Munoz was fairly vague about other plans that he has in mind for the airline. Regarding improving the experience for travelers he mentioned better coffee on board, decreased bereavement fares and improved on-time rates. He also wants to change some of the add-on fees and provide loyal customers and employees with “small wins.” Within the company itself, he plans to fire consultants. 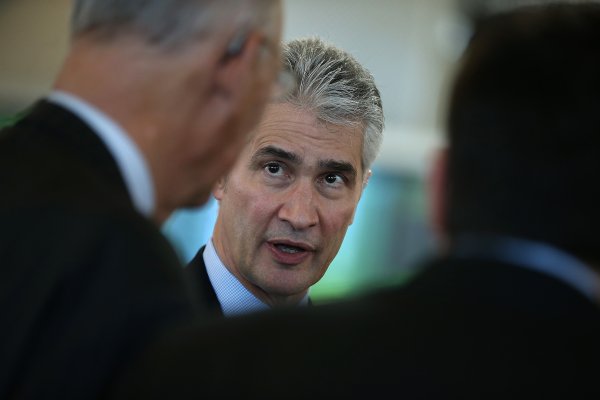 Everything to Know About United's Departing CEO
Next Up: Editor's Pick