Hurricane Joaquin is gathering strength as it barrels through the Bahamas and possibly towards the East Coast of the United States; Virginia and New Jersey have already declared a state of emergency ahead of the storm.

New Jersey Governor and presidential candidate Chris Christie declared the state of emergency Thursday over concerns of flooding, but he assured his state that the government was prepared to handle the weather. Declaring a state of emergency allows emergency responders to begin preparations for the storm.

“We know there is definitely going to be moderate and likely to be major flooding events in South Jersey Friday and Saturday with 5 to 6 inches of rainfall expected to come,” Christie said in a press conference, ABC reports. “Now is the time for you to prepare.”

Virginia Governor Terry McAuliffe announced the state of emergency Wednesday after the state was soaked by rain this week. According to the Weather Channel, 4.39 inches of rain fell on Blacksburg Tuesday, making it the town’s wettest day on record. There was also heavy flooding in parts of the state, including around James Madison University. Some schools and roads had to close due to the flooding.

The hurricane strengthened to a major Category 3 storm Wednesday night, the Weather Channel reports, and is on track to become a Category 4 storm Thursday. The center of the storm is currently in the central Bahamas, where some areas may experience “life-threatening conditions.”

Hurricane Joaquin could hit the United States by early next week, which would be the East Coast’s first landfalling hurricane in 15 months. However, there isn’t much certainty about the hurricane’s path, say meteorologists. Many models show Hurricane Joaquin hitting the U.S., but the model that accurately predicted Hurricane Sandy three years ago showed it veering away from the land.

Even if the hurricane doesn’t make landfall in the U.S., areas in the East Coast could still feel its effects with heavy rain and flooding. But the National Hurricane Center warns that hurricane watches may need to be issues in parts of the East Coast as soon as Thursday night. 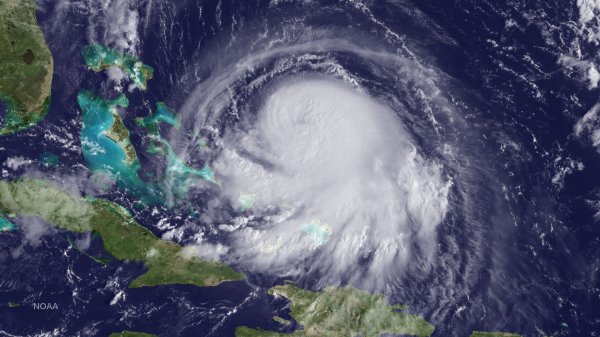 How Hurricane Joaquin Could Affect the U.S.
Next Up: Editor's Pick