A Thrilling High-Wire Act in The Walk

As Petit, Gordon-Levitt visualizes his caper with his girlfriend, played by Charlotte Le Bon.
Sony Pictures
By Joe Neumaier

Director Robert Zemeckis’ films often hurtle forward with radical propulsion. But his latest, The Walk, is a vertiginous beauty, and Zemeckis (Back to the Future, Forrest Gump) slows down so we can savor it. The film is about looking up, looking inward–and the time a French wire walker traipsed between the Twin Towers. The acrobat, Philippe Petit (a terrific Joseph Gordon-Levitt), narrates his tale, saluting his “great love,” the World Trade Center towers, which Petit spots in a photo of the architect’s model in 1968. An accomplished Parisian daredevil, he’d already conquered Notre Dame Cathedral.

The newly built towers pose a unique challenge, so Petit puts together a team. Arriving in New York City, Petit’s accomplices sneak to the Trade Center rooftops for research. They shoot an arrow with a cord attached, allowing them to set the rigging. Just after daylight breaks on Aug. 7, 1974, Petit steps out 110 stories above the ground. That’s when The Walk goes airborne. The planning is fun and fascinating, but Zemeckis puts us in the sky with Petit using all-enveloping Imax 3-D.

As befits an era of folk heroes, some story elements from Petit’s memoir To Reach the Clouds (also the basis for the acclaimed 2008 documentary Man on Wire) are condensed, but it all hangs together. The events of Sept. 11 are inextricably part of the story’s shadow pull, yet sentiment is kept at arm’s length. When Petit drops to one knee midwalk, it’s a genuflection to the city and audacious artistry as much as to the inevitable. The towers are lovingly re-created–every column and bolt stunningly tactile. Yet it’s Gordon-Levitt’s engaging turn and the thrill of feeling as if we’re 1,350 ft. high that take our breath away. The Walk is a visionary high-wire act. 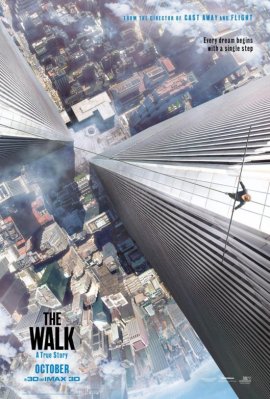 Can You Spot What's Wrong With the Poster for The Walk Movie?
Next Up: Editor's Pick