Armed police officers stand guard Oct. 1, 2015, near the site of a parcel bomb explosion the previous day in the city of Liuzhou in southern China's Guangxi region
Kyodo/AP
By Nash Jenkins

A string of explosions shook a small city in the southeast Chinese province of Guangxi on Wednesday afternoon and Thursday morning, claiming an estimated seven lives and injuring more than 50 others.

Local media reported Wednesday that at least a dozen bombs in mail packages detonated in commercial centers, government facilities, a hospital, and a bus station between 3:15 and 5:00 p.m. local time in Liucheng, about 270 miles northwest of the city of Guangzhou. Thursday saw a similar blast in an apartment complex, which occurred at around 8 a.m. and left one person injured.

“There were so many of them, and they were so loud, everyone in [Liucheng] could hear them,” one local hotel employee named Li told the Associated Press about Wednesday’s blasts. “They sounded like someone was blasting rocks in the mountains.”

The attacks, which authorities are treating as a criminal matter rather than terrorist in nature, come at the dawn of China’s weeklong National Day celebrations, commemorating the establishment of the People’s Republic on Oct. 1, 1949.

Police have identified a 33-year-old suspect in the bombings, whom they believe hired others to deliver the explosive packages, the South China Morning Post reports. The local postal service has suspended all parcel deliveries in Liucheng until Sunday. 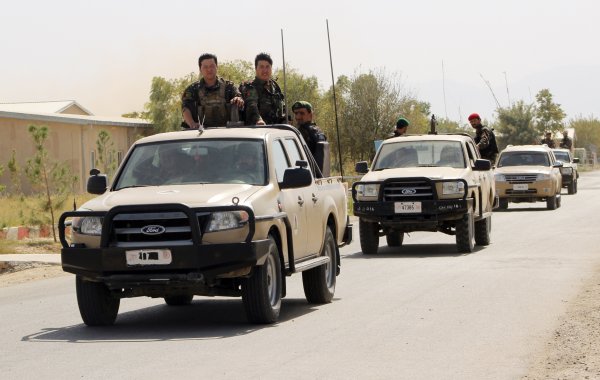 Afghan Troops Retake Kunduz From the Taliban
Next Up: Editor's Pick