Democratic presidential candidate Senator Bernie Sanders (I-VT) speaks to guests at an event sponsored by Institute of Politics at the University of Chicago on September 28, 2015 in Chicago, Illinois.
Scott Olson—Getty Images
By Sam Frizell

Bernie Sanders has raised more than $24 million over the past three months of campaigning, according to an early estimate provided to TIME by an aide, a significant haul that exceeds the campaign’s initial goals and reflects the Vermont Senator’s widespread grassroots support.

Sanders’ cash has come from 650,000 individual contributors over the five months since he’s been in the race, a figure that exceeds the total contributors to Barack Obama’s 2008 campaign at this point in the election cycle. Obama raised just over $20 million in the third quarter of 2007, $4 million less than Sanders in the same period.

“It is an objective measure of how far the campaign has come in a very short time,” said Sanders campaign adviser Tad Devine on the recent figures. “If we continue to build on this we will not only have resources for the front end of the campaign, we will have built an infrastructure … when we move into the national campaign on Super Tuesday.”

Sanders’ haul is just $4 million less this quarter than Hillary Clinton, who has held a slew of fundraising house parties aimed at raising $2,700 per individual. Hillary Clinton raised $28 million in the third quarter, according to an early estimate from a Clinton aide. The Clinton campaign has not said how many contributors have given to the campaign.

Sanders has ridden a wave of populism and disappointment with the Obama Administration on the left, edging out Clinton in polls in New Hampshire and Iowa. He remains well behind in national surveys, and in total fundraising compared to Clinton.

His campaign has brought in nearly $40 million in the first two fundraising quarters, while Clinton has raised a total of $75 million.

Obama sent letters to supporters in 2008 marking the 500,000th individual contributor in early January 2008, three months later in the campaign cycle and a year after the then Senator entered the race. At this point in the cycle, Obama had raised more total money than Sanders.

Sanders routinely points to his average donation size and number of contributors as evidence that he is building a grassroots “political revolution.” His war chest is largely fueled by online operations, where he has raised a total of one million donations.

Though he is rapidly growing his staff in early states, the Vermont Senator has a smaller campaign operation than his rivals. He has purchased no media time and paid for no polling, while the Clinton campaign has spent several million on ad buys in the early states. Sanders retains $25 million cash on hand, according to estimates provided by the aide.

Sanders raised 1.3 million contributions from his 650,000 donors, the Sanders aide said, for an average of around $30 per donation.

Sanders’ campaign is preparing to invest in staff in some states beyond the four early states, and is looking at Colorado, Michigan, Illinois, Wisconsin and Maine. Sanders is also considering ad buys in the months ahead, according to Devine.

Sanders’ advisers had set a benchmark of $40 million by the Iowa caucus in February to build a viable national infrastructure. With the latest numbers, Sanders is on track to well exceed that goal.

Sept. 30 marks a key fundraising deadline for all 2016 presidential campaigns, which are required to turn over their fundraising figures to the Federal Election Commission. 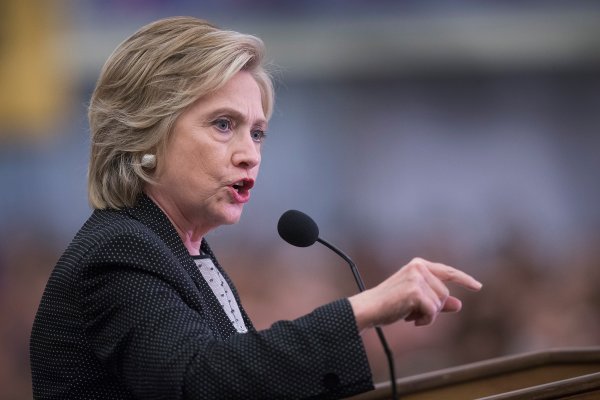 Hillary Clinton Raised $28 Million in the Past 3 Months
Next Up: Editor's Pick