A Murder That Shocked the World, at Sea and on Stage

The four men were not Norwegian, as they had told a cruise ship hostess, and they weren’t there to play shuffleboard. On this day, Oct. 7, 30 years ago, members of the Palestine Liberation Front hijacked an Italian liner, the Achille Lauro, during a Mediterranean cruise and took more than 400 passengers and crewmembers hostage.

Many of the passengers were American—and they received the roughest treatment during the two-day ordeal. According to TIME’s 1985 account, the hijackers, armed with hand grenades and Soviet submachine guns, separated American and British passengers from those of other nationalities. They placed gas cans nearby and said they’d kill these hostages first if their political demands, including the release of 50 Palestinian prisoners being held in Israel, weren’t met.

Then they followed through with their threat, killing the American who was perhaps least able to defend himself: Leon Klinghoffer, a 69-year-old Jewish New Yorker who had been confined to a wheelchair since he was disabled by a stroke. The terrorists shot him in the head and threw his body, and his wheelchair, into the sea.

Klinghoffer’s murder provoked so much outrage in the U.S. that President Reagan ordered Navy fighter pilots to undertake a daring mission to bring the hijackers to justice.

Six years later, however, the public shifted its outrage to a new target: the artistic team behind a 1991 opera, The Death of Klinghoffer. Although TIME’s reviewer found it relatively tame—a “sweet, sorrowful” production that “takes no prisoners, and takes no sides either,” others, including Klinghoffer’s surviving relatives, felt differently.

When the opera was reprised last year at the Met, crowds of protesters (including former Mayor Rudy Giuliani) picketed outside, accusing the production of glorifying terrorism and promoting an anti-Semitic agenda.

In a statement published in the opera playbill, Klinghoffer’s daughters, Lisa and Ilsa Klinghoffer, voiced their own discontent with the opera’s portrayal of the villains. They wrote:

But, they argued, “[t]errorism cannot be rationalized. It cannot be understood.”

Opera-goers, meanwhile, gave the production mixed reviews. According to one viewer, interviewed by The Guardian, “the production achieved a transformative level of transcendence.” In the words of another, it had “the deft touch of a sledgehammer.”

Read more from 1985, here in the TIME archives: Terrorism: The Voyage of the Achille Lauro

For your security, we've sent a confirmation email to the address you entered. Click the link to confirm your subscription and begin receiving our newsletters. If you don't get the confirmation within 10 minutes, please check your spam folder.
Most Popular on TIME
1
What Wandavision Means for the MCU
2
How mRNA Tech Gave Us the 1st COVID-19 Vaccines
3
Was Martin Luther King Jr. a Republican or a Democrat? 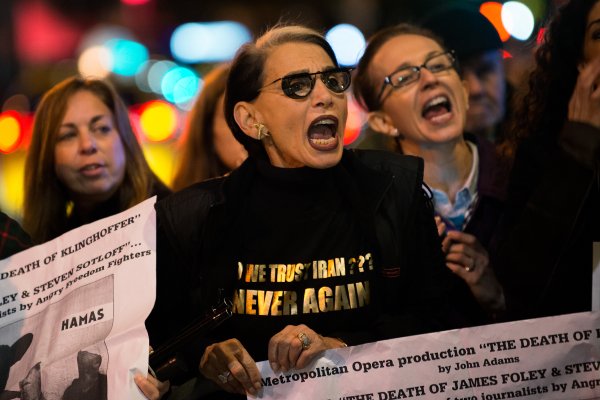 'The Death of Klinghoffer': Censorship Isn't Just Anti-Democratic—It's Anti-Jewish
Next Up: Editor's Pick