Republicans have handed Hillary Clinton’s embattled campaign a gift after months of damage over the former Secretary of State’s use of a private email server.

Kevin McCarthy, the House majority leader and a leading candidate to replace John Boehner as Speaker, credited the House Benghazi Committee with lowering Clinton’s poll numbers, a gaffe that undermines Republicans’ claim that the committee is a nonpartisan investigation.

“Everybody though Hillary Clinton was unbeatable, right?” McCarthy said in an interview with Fox News. “But we put together a Benghazi special committee, a select committee. What are her numbers today? Her numbers are dropping. Why? Because she’s untrustable. But no one would have known any of that had happened, had we not fought.”

McCarthy’s comments will likely give Clinton a key talking point as she prepares to face questioning from the Benghazi Committee on October 22 over her tenure as Secretary of State. The statement reinforces statements that Clinton’s surrogates have made for months: that the Benghazi Committee is a politically motivated tool of the GOP designed to damage Clinton’s campaign.

“This is a damning display of honesty by the possible next Speaker of the House,” said Clinton spokesman Brian Fallon. “Kevin McCarthy just confessed that the committee set up to look into the deaths of four brave Americans at Benghazi is a taxpayer-funded sham. This confirms Americans’ worst suspicions about what goes on in Washington.”

Clinton’s allies were already jumping on statement, with the super PACs affiliated with the campaign broadcasting the message. A spokesman for Correct the Record, a pro-Clinton super PAC, called McCarthy’s comments “disgraceful” in a statement sent to reporters.

Rep. Trey Gowdy, who chairs the Benghazi Committee and Speaker Boehner have long said the committee was formed to investigate the attack at Benghazi where ambassador Chris Stevens was killed. The committee has cost $4.5 million and has not held a hearing since January.

The committee has been a gadfly to the Clinton campaign since long before she started her campaign, though other conservative groups like Judicial Watch have also played a large role in making damaging revelations.

Rep. Elijah Cummings, Democrat and ranking member of the committee joined the chorus of voices attacking the GOP. “It is shameful that Republicans have used this tragedy and the deaths of our fellow Americans for political gain,” he said.

Correction: The original version of this story incorrectly quoted Clinton spokesman Brian Fallon. He said of Kevin McCarthy’s comments about a House committee lowering Clinton’s poll numbers, “This is a damning display of honesty by the possible next Speaker of the House.” 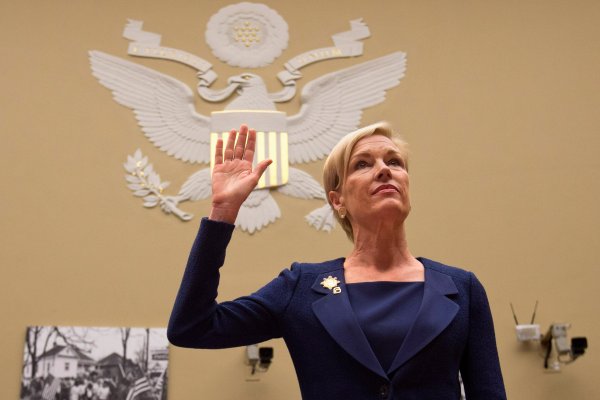