Seinabo Sey performs at Scala on May 20, 2015 in London, England.
Joseph Okpako—Getty Images
By Nolan Feeney

When she was 21-years-old, the Swedish singer Seinabo Sey was suffering an existential crisis. She wrote a song called “Younger,” in which she chastised herself for not pursuing her music-career dreams more aggressively. “You might as well get it while you can, babe/ ‘Cause you know you ain’t getting younger,” she tsk-tsked on the 2013 track.

At an age when most people are only beginning their careers, Sey was already fretting about a ticking clock. To understand that, it helps to know about jantelagen, the Scandinavian social code of modesty. Its ten rules dictate citizens keep their heads down and disavow themselves of any notions that they’re special or better than anyone at anything. “Of course it’s a reaction from living in that kind of environment all my life,” says Sey, now 24, of songs like “Younger.” “I’ve always had age anxiety going on, but I’m competing with what I know I’m capable of—I know I should be working harder.”

Great pop music often seems effortless, but Seinabo Sey (pronounced say-nuh-bo see) has turned the turmoil of writing into its own kind of beauty on her debut album Pretend, due Oct. 23. Instead of being discouraged or paralyzed by the gap between ambition and output many creative twentysomethings encounter, she channels her self-doubt into a haunting mix of hip-hop, soul and pop with a voice worthy of a future Bond theme song. “I’ve been writing songs about not writing songs for a very long time now,” says Sey, unseasonably dressed head-to-toe in all black on a humid August day in New York. “I find that a lot of times I’m out partying or procrastinating and really destroying myself instead of just doing what I love.”

The daughter of a Swedish mother and Gambian father (whom she named her first two EPs after), Sey grew up in the small coastal city of Halmstad and spent a few years of her youth in Gambia. Her father, the late Maudo Sey, was an accomplished Gambian musician, but there’s little evidence of his sound in his daughter’s music—only the percussion on the pulse-spiking “Words” hints at any of Pretend’s West African heritage. As a kid, Sey gravitated toward Lauryn Hill and Destiny’s Child. At the age of 15, she moved by herself to Stockholm and enrolled in three years of soul-music education, where she immersed herself in the music of artists like Aretha Franklin.

“I never really grew up seeing black people around me,” she says, which has led to mixed feelings about how the “soul” label is applied to her music now. On one hand, it’s a fitting description for the steady march of “Easy” or “Hard Time,” the latter of which was the best thing about the Stonewall trailer. On the other, she laughs, “In Sweden I can do anything and they’re still going to call it soul music because I’m black.”

After a stint performing as a hype woman for the Swedish rapper Afasi, she contacted his producing partner Magnus Lidehäll about working together. Lidehäll came up in Sweden making hip-hop beats, but he’s best known for crafting tracks for dance divas like Britney Spears and Kylie Minogue, and his experience as a electro-pop tunesmith rubbed off on Sey. “Pop music really gives you a structure that makes your song a little more effective,” she says. “I had to learn that. I’d write like a rapper before.” (She recently dusted off her rapping skills to jump on a ladies-only remix of Swedish rapper Michel Dida’s “Höru Mej Bae.”)

Sey doesn’t write many songs about love or heartbreak, even though she has a clear knack for it—the heart-thumping “You” captures the sting of sudden unrequited love with striking precision. Instead, there’s a tough-love fairy godmother quality—part pep talk, part stern lecture—to songs like “Who,” which makes use of Lidehäll’s affinity for vocoder harmonies (a trick he also employed on Mapei’s “Don’t Wait”) and asks questions like “Who do you think you are? … What did you do to deserve that?” They’re directed more at herself than the listener, with the Gambian tradition of providing guidance through music seeping in as much as the jantelagen. “My dad was really one of those people who would give me advice like that,” she says. “‘You’re not getting away with this, I see what you’re doing!’ It’s absolutely about dragging yourself out of whatever darkness you’re in to focus.”

In 2013, the same year she released “Younger,” her father passed away. His death inspired the poignant album closer “Burial,” whose church organ and gospel-choir vocals heighten the tension between mourning and taking comfort in the idea of a better place after death. Sey first worked on the track before his death but struggled with what she wanted to say, using placeholder lyrics before putting it aside. When she revisited it after his passing, she eventually found the words. “It’s hard to write about feelings that are complex, where you can’t see the light,” she says. “It’s me trying to see what we lost and be relieved and try to be happy.”

It’s a fitting conclusion to an album whose creation helped changed Sey’s tune about her work ethic. Now that it’s done, Sey cuts herself a little slack. The same darkness she sang about trying to pull herself out of ultimately spawned Pretend‘s most emotionally resonant material. “Sometimes you need that dark space or those thoughts to see the light,” she says. “You can’t be an overachiever all the time. You have to take that time to turn off your mind and embrace it.” 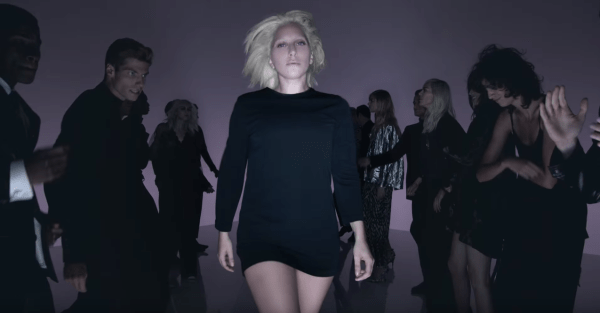