Eighteen months ago, when Russia seized Ukraine’s Crimean peninsula, confusion prevailed in the West. Today, as Russia sends troops, armor, and aircraft to Syria, we are once again perplexed. On Monday President Vladimir Putin provided the explanation: Russia’s intervention is aimed to defeat ISIS and reduce the flow of refugees to Europe. A review of the last major Russian intervention, in Ukraine, might help us to evaluate this claim.

The superficial links between the two conflicts are obvious. For the first time since Russia invaded Ukraine, a ceasefire is holding. This has allowed Moscow to send special forces from Ukraine to Syria. The naval base in Crimea is now used to project Russian power southwards.

The deeper connection is Russian doctrine. Authoritarian leaders are legitimate, while popular resistance is not. President Putin’s claim to oppose Islamic terrorism is true enough. But he also opposes, with equal fervor and greater determination, secular democrats in his own country and in Europe. Russia invaded Ukraine not to halt a “military coup,” as President Putin rather oddly claimed on Monday, but to hinder a democratic movement by military action. In Syria, Russia has helped and presumably will continue to help Assad repress all resistance, not just the Islamicist variety.

From Moscow’s perspective, there is not much difference between university students protesting in Kyiv for closer ties with the European Union and Islamicist terrorists gaining ground in Syria. In both cases, Russian leaders can, quite understandably, see a coming domestic problem. If people can gather peacefully in Kyiv, why not in Moscow? If Islamic terrorism can work in Syria, why not in southern Russia?

But the more important factor is domestic public opinion. Russia is a television culture, and Russian television news is devoted almost entirely to the world beyond Russia. In the last few days, Russian television has completely changed the subject: from Ukraine to Syria. What must not be mentioned is that Russia has not achieved its goals in Ukraine. The Ukrainian war shows that Russia can fail even when the European Union pays only a very small amount of attention to the conflict. What Russian leaders seem to want in Syria is a war without EU sanctions, which they can win for the viewers at home.

Russian leaders seem to fear the European example more than they fear Islamic terrorism. The post-communist and post-Soviet countries that have joined the European Union are not only freer but richer than Russia. President Putin presented this in his speech Monday as heedless expansionism, setting aside the basic fact that the EU enlarged at the initiative of the new member states. Russia invaded Ukraine to prevent one more post-Soviet country from succeeding in ways that Russia has not.

The war in Ukraine was thus never about Ukraine alone. It was always about the destruction of the European project as such. If the European Union fails, then there is no danger that Russians will see Europe as an alternative. If Europe fragments into nation-states, Russia becomes a much stronger player. Thus Russia seeks to destroy the European Union by supporting radicals and populists who oppose European integration and seek a return to the nation-state. Although President Putin spoke of a revived “anti-Nazi coalition,” his friends in Europe include fascists.

So Ukrainian experience gives reason for skepticism about Putin’s claim that Russia is intervening in Syria to help Europe with its refugee problem. The politics might well be exactly the opposite. Having found a powerful ally in its quest to end European integration, the European far right has followed Moscow’s lead on the Ukrainian conflict. But the natural subject of Putin’s allies in Europe is immigration. By supporting the Assad regime, Russia helps to produce the refugees that drive European politics rightward.

Syrian refugees who arrive in Europe must be treated humanely and according to law. At the same time, European leaders might consider the possibility that Russian policy in Syria is aimed toward the transformation of the country into a refugee factory. In Ukraine, Russian intervention generated two million refugees among precisely the people Moscow claimed it was protecting. In Syria, it has been the Assad regime, which Russia has now supported, that has been responsible for the vast majority of the refugees.

Whether opposing European Union or Islamicist terrorism, the domestic sources of Russian policy are the same. The problems that Russia faces are inside Russia, and insoluble from beyond Russia. There is no principle of political succession in Russia today, and so Kremlin is telling its people stories about the infallibility and immortality of a leader. In a televisual culture, domestic news is all but absent, and Russia’s presence on the world stage becomes the only story. But the power to change the subject from Ukraine to Syria, as President Putin was trying to do in New York, is not the power to make the story go on forever.

But did President Putin even manage to change the subject? He made some good points about American policy in Iraq. But when he sought the words to define just what he opposed, he gave an eerily accurate description of Russia’s intervention in Ukraine. He denounced “zones of anarchy,” which is what Russia created in the Donbas. He decried “belief in one’s exceptionality,” thought it was precisely the idea that Russia as big brother can decide whether Ukraine exists was given as the reason for war. He spoke of the “tragic consequences” of exporting one’s own social model and the dangers of creating “protectorates.” That is indeed the lesson of the Ukrainians killed and displaced by policies known as the “Russian spring” and “New Russia.”

President Putin spoke of the “universality” of international law regarding “sovereignty.” And here he was quite right. If Russia were serious about law and sovereignty, President Putin might have announced at the UN that Russia is withdrawing its support from its separatist clients in Ukraine and withdrawing its troops and armor from sovereign Ukrainian territory. If he had said these things, then the world would have had very good reason to listen.

Timothy Snyder is the Housum Professor of History and the author of Black Earth: The Holocaust as History and Warning, released earlier this month. 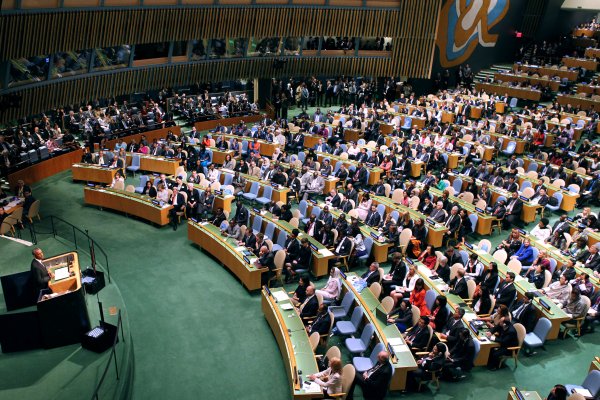 The U.N. Chose Way Too Many New Development Goals
Next Up: Editor's Pick