Last week’s Primetime Emmy Awards sparked a conversation—or continued one, really—about diversity on television. Viola Davis became the first black woman to win Best Actress in a Drama Series and delivered an emotional acceptance speech that emphasized the importance of creating compelling roles for women of color. Uzo Aduba, meanwhile, became the first actress ever to win an acting Emmy for both comedy and drama in the same role.

At an Advertising Week panel Tuesday morning moderated by the media company WhoSay, Aduba joined her Orange Is the New Black castmate Dascha Polanco and Unbreakable Kimmy Schmidt’s Tituss Burgess to continue the conversation about diversity on TV—especially on non-network shows like the ones they all appear on (both Orange Is the New Black and Unbreakable Kimmy Schmidt are original programming from Netflix).

The actors discussed not only the importance of representation on television, but also what diverse representation means, how to do it successfully and where television is headed in the coming years. They all agree that shows like theirs—as well as shows like Empire, Black-ish and Fresh Off the Boat—signify a move in the right direction. But, they say, it would be foolish to think that TV has evolved as much as it needs to.

Here are the highlights from their discussion:

Burgess on the importance of seeing diverse stories on TV, and his character on Unbreakable Kimmy Schmidt, a gay black performer named Tituss Andromedon: “When I was growing up, I think if I had Titus Andromedon, I would have been really scared or really inspired. I think I would have come out differently, and who knows where I would be now having been afforded the opportunity to feel comfortable in my skin earlier.”

Aduba on whether Orange Is the New Black, if it premiered in 2015 instead of 2013, would still need to cast an attractive, white female lead to gain traction: “I would answer with a very solid ‘I don’t know,’ leaning into ‘Probably.’ I think it would be perhaps foolish, I might say, or presumptuous, to believe or assume that in three plus years of television, all the progress that needed to be made had been conquered in that time through a singular show…I think that in time we might get there. If that’s the desire of television, I think that we will get there.”

Burgess on casting TV shows to reflect reality: “When I did The Little Mermaid in 2008, the director said to me, ‘Tituss, I insisted that Disney cast people of all different races because we are doing a fictional story that takes place underwater, and there are fish and amphibians that we have never met yet, so why on earth would we think it would be lily white? When we’re doing these TV shows that are fictional, they take place on earth, and we know what things look like, and what different races and genders and creeds are, so why would we omit them?’”

Aduba on how we can expect TV to change in the next five years: “Audiences are ready for the truth and whatever that truth might look like, physically, internally… It’s really exciting to see now that television is investing in the truth, authentic representation as an extension of that, and writers are actually excited by that. And I think what’s really wonderful is that audiences themselves are finding themselves excited by it.”

Burgess, going slightly off-topic to offer advice to an audience member’s 6th grade daughter who wants to be a comedian: “People-watch. Shut up and let everyone else act a fool.” 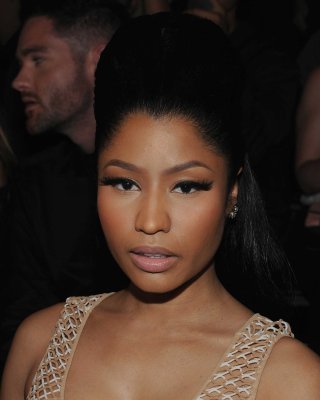 Nicki Minaj to Produce TV Series About Her Life
Next Up: Editor's Pick