Jamaicans Call for Slavery Reparations Ahead of British PM Visit

Portia Simpson Miller, leader of the People's National Party, pumps her fist to supporters during the victory rally of the parliamentary elections in Kingston, Jamaica, Dec. 29, 2011.
Collin Reid—AP
By Maya Rhodan

Ahead of British Prime Minister David Cameron’s visit to Jamaica, leaders on the island are calling for Cameron to issue a formal apology for slavery and offer reparations.

Leaders in Jamaica are threatening not to attend parliamentary meetings, at which Cameron is expected to speak, and others are suggesting members of Parliament turn their back on the Prime Minister when he speaks.

“We ask not for handouts or any such acts of indecent submission. We merely ask that you acknowledge responsibility for your share of this situation and move to contribute in a joint [program] of rehabilitation and renewal,” Sir Hilary Beckles, vice chancellor at the University of the West Indies, wrote in the Jamaica Observer.

The purpose of Cameron’s trip is to restore ties between the United Kingdom and island nations like Jamaica and Grenada, but the focus on slavery could overshadow his speeches about the future.

Officials in the U.K. told the Guardian that they do not believe there is a need for an apology or reparations.

“The PM’s point will be he wants to focus on the future. We are talking about issues that are centuries old and taken under a different government when he was not even born. He wants to look at the future and how can the U.K. play a part now in stronger growing economies in the Caribbean,” an official told the Guardian. 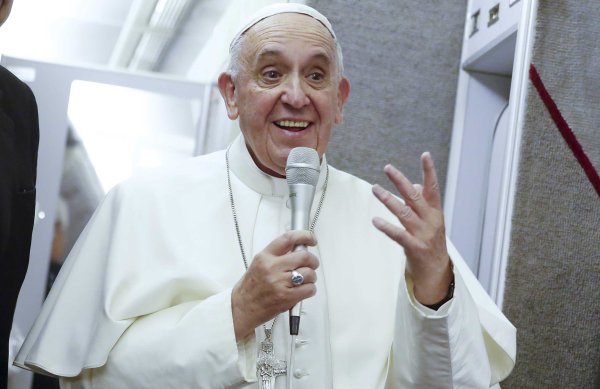 Behind the Scenes With Pope Francis in America
Next Up: Editor's Pick