Throughout the past year, countries around the world have announced individual commitments to cutting carbon dioxide emissions in hopes these cuts will keep global temperatures from rising more than 3.6°F (2°C) by 2100. With research showing the pledged emission cuts aren’t anywhere near enough to avoid dangerous climate change, experts say cities and other sub-national governments will be responsible for making up the difference.

The good news is that emissions from cities represent more than 70% of energy-related carbon dioxide emissions, and local leaders often have more autonomy to enact regulations—autonomy they are willing to exercise. Earlier this month, cities across the U.S. and China announced commitments to curtail their own emissions by a total of 1.2 gigatons of carbon dioxide annually. (For perspective, the entire U.S. emits between 5 and 6 gigatons each year.) And last week, states, provinces and other regions from Quebec to South Australia announced voluntary commitments to cut carbon emissions leading to a 7.9-gigaton reduction by 2030.

“Cities have a capability to execute,” said Jules Kortenhorst, the CEO of the Rocky Mountain Institute, an energy think tank. “Mayors are both powerful and grounded in reality.”

Indeed, many climate and energy experts have turned to cities precisely because mayors can often take action in ways that national governments cannot. In the U.S. President Barack Obama has seen efforts to institute a cap-and-trade system thwarted and regulations on power plants challenged in court. But at the state level, California enacted a cap-and-trade system in 2006, cut greenhouse gas emissions and still managed to grow the economy.

“Even without national legislation, countries can make great progress if leadership comes from other places,” former New York Mayor Michael Bloomberg said in an address during the city’s Climate Week. On Monday, Bloomberg announced the creation of an umbrella organization to combine the efforts of the Compact of Mayors and the Compact of States and Regions, two previously separate organizations aimed at cutting emissions at the sub-national level. Earlier this week, Bloomberg said the Compact of Mayors had obtained commitments from more than 175 cities that are collectively home to more than 250 million people.

While city programs can only address emissions in a narrow geographical area, policy experts say those efforts can lay the groundwork for future national efforts. China, for instance, experimented with cap-and-trade programs in seven cities before announcing the creation of national system last week. Other cap-and-trade systems, in places like California and the European Union, may be used as models for future international systems.

Later this fall, while negotiators from national governments around the world work to hammer out a climate deal in Paris, policymakers for state and regional governments will also be meeting to construct their own agreements on how to reduce carbon emissions.

“Even if the average commitment of governments are [low], a number of local authorities think they can do better,” said French Climate Ambassador Laurence Tubiana, who is helping lead the Paris conference. “That’s positive.” 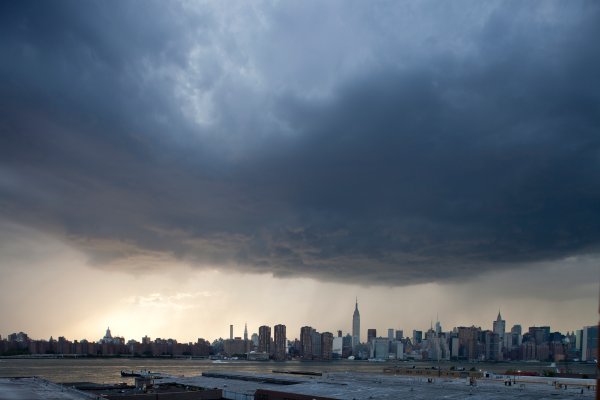 Why New York City Flood Risk Is On The Rise
Next Up: Editor's Pick