Syrian dictator Bashar Assad became a rope in a tug-of-war Monday between President Obama and Russian President Vladimir Putin, as the two leaders debated his fate following a four-year civil war that has killed more than 200,000 and sent 4 million Syrians fleeing their country.

“We think it’s an enormous mistake to refuse to cooperate with the Syrian government and its armed forces who are valiantly fighting terrorism face to face,” Putin told the UN General Assembly in New York.

Obama, speaking shortly before Putin, warned that the international community shouldn’t let political leaders use violence to hang on to power. “In accordance with this logic, we should support tyrants like Bashar al-Assad who drops barrel bombs to massacre innocent civilians because the alternative is surely worse,” he said.

Their dueling speeches come as Moscow’s presence in the region is growing.

After the U.S. military pulled out of Iraq in 2011, the Islamic State of Iraq and Greater Syria seized the moment to expand inside both nations. In response, the U.S. doubled down by doing little—and now Russia is doubling down by doing a lot, including dispatching warplanes and tanks to Syria. “Today, we provide military and technical assistance both to Iraq and Syria and many other countries of the region who are fighting terrorist groups,” Putin told the UN gathering.

With the U.S. and its allies exhausted by 14 years of war in the region, Russia can accomplish a lot with relatively little effort. First, its military moves shore up the embattled government of Assad, a long-time Moscow ally. Second, it cements Russia’s hold on its air base south of Latakia and its naval base at Tartus, its only Mediterranean port. Finally, an anti-ISIS intelligence-sharing pact announced Sunday among Russia, Syria, Iran and Iraq makes clear Moscow’s growing clout in the region.

“Russia’s recent military escalation in Syria is a further reminder that when the US does not take the initiative, others will fill the vacuum,” David Petraeus, ex-CIA chief and former Army general, told Congress last week.

Putin said his government supports Assad against the militants trying to overthrow him—militants he believes were unleashed by the U.S. invasion of Iraq in 2003. While he didn’t mention the U.S. by name, Putin blamed it for the Middle East’s current woes. He referred to “a single center of domination” following the Cold War that tried “to push for changes within other countries based on ideological preferences.” Such an attitude, Putin said, “has resulted in a brazen destruction of national institutions and the lifestyle itself.”

Putin spoke to the General Assembly for the first time in a decade as U.S. policy in the region struggles: the push to train moderate rebels has failed and ISIS continues to hold major cities in both countries despite daily U.S.-led air strikes. U.S. officials say they were surprised by the announcement of the anti-ISIS intelligence pact.

Obama told the UN that the U.S. “is prepared to work with any nation, including Russia and Iran, to resolve the conflict. We must recognize that there cannot be, after so much bloodshed, so much carnage, a return to the prewar status quo”—a clear reference to Assad remaining in power. But Putin’s increased presence in Syria has put Obama in a pincer: if Obama wants to keep U.S. troops out of the fight, he cedes ground to Putin. And ceding ground to Putin tightens Assad’s grip on power.

Putin’s gambit exploits the American leeriness over Assad’s fate. The U.S. has focused only on defeating ISIS, and has forced the rebels it is training to forego any efforts to oust Assad. But Putin has dispatched dozens of warplanes and helicopter gunships outfitted with ground-attack missiles, saying they are needed to defend additional bases Russia might set up elsewhere in Syria. But bullets are fungible—they also can be used to kill any serious threat to Assad’s hold on power.

This isn’t the first time Russia has snatched the initiative from the U.S. when it comes to Syria. Obama warned of air strikes against Assad’s forces in 2013 if he used chemical weapons to hold on to power. Assad ignored Obama’s self-declared “red line” and killed nearly 1,000 with them. Obama blinked, and embraced a Russian offer to work with Syria on getting rid of the chemical weapons, instead of following through on his threatened military action. 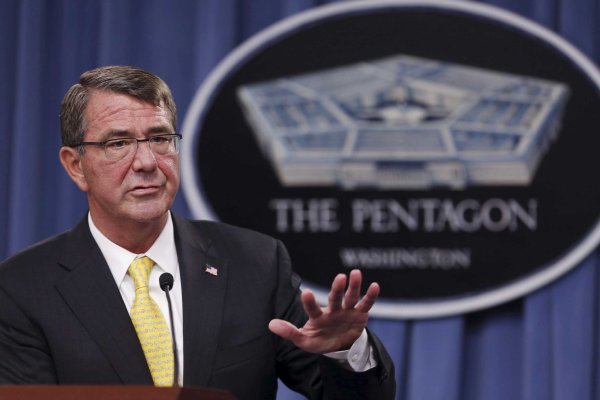 Pentagon Promotes 'Lean In' Groups to Boost Women's Leadership
Next Up: Editor's Pick