A Brief History of the Search for Water on Mars

A 3-D computer model (a digital terrain map) of the walls of Garni Crater on Mars based on stereo information from two HiRISE observations showing dark, narrow streaks on the Martian slopes that are inferred to be formed by seasonal flow of water on contemporary Mars.
NASA/JPL-Caltech/Univ. of Arizona
By Alexandra Sifferlin

The news on Monday that signs of water had been found on Mars is, NASA declared, “the strongest evidence yet that liquid water flows intermittently on present-day Mars.” It’s also the latest step forward in the long history of humankind’s search for the life-sustaining liquid on the Red Planet—and of our interest in the ever-intriguing possibility of sustained life on Mars.

The excitement over possible Martian inhabitants, and what they might drink, was started in the 19th century by the Italian astronomer Giovanni Schiaparelli, who described hazy streaks on the surface of the planet, calling them canali. This Italian word means “channels,” TIME explained decades later, but was erroneously translated as “canals,” which suggested that someone had chosen to build them.

The idea of those channels—whether they were an act of nature or an act of intelligent construction—continued to fascinate scientists as observation technology improved. In 1923, for example, scientists argued that powerful telescope imagery suggested that the topography of Mars contains contains canals and polar snow caps. “These and other observations have led to the irresistible conclusion that Mars has air, water, warmth, and vegetable life,” TIME reported. A British astronomer, P.M. Ryves is quoted in the story saying Mars “appears to be far from a dead world,” adding, “whether it is inhabited by intelligent beings like ourselves is perhaps the most absorbent question that confronts the human race.”

MORE: Why Humanity Keeps Putting Off the Trip to Mars

Without a solid photo of the planet, exactly what type of water structures were possible was up for debate. A TIME story from 1940 summed up the most current thinking thus: “Mars has a little water, as the white polar caps show. These caps melt in the Martian summer, accumulate again in winter.” Hazy images of the canali and of areas that appeared green or brown suggested to many scientists that there might be vegetation out there.

By the end of the 1960s, the far-off telescope images had given way to close-up photographs. Water no longer seemed like a certainty. An April 4, 1969, story in TIME debated the question: “Contemporary scientists have been far less convinced that Mars has water,” the article noted. “They believe that the caps consist not of snow or ice but largely of frozen carbon dioxide, the principal constituent of the atmosphere of Mars.” On the other hand, a team of astronomers at the McDonald Observatory in Texas had recently announced that they obtained “absolutely conclusive proof” of water vapor on the planet. Using a telescope and the spectrograph the researchers claimed to discover water vapor in the planet’s atmosphere.

By 1976, scientists had changed their minds again. Data sent by the Viking 2 orbiter revealed “the summer ice cap of Mars’ North Pole is composed of frozen water,” TIME explained, adding that “the discovery confirms that Mars has far more water than had previously been believed, and suggests that even more lies in a shell of permafrost below the planet’s rocky surface. In fact, scientists said, the polar caps might be merely the visible tips of an iceberg-like Mars.”

MORE: What the Modern Presence of Water on Mars Means

In more recent years, the evidence has continued to flood in. By 2000, the Mars Global Surveyor, which at the time had been orbiting Mars since 1997, sent images that appeared to be the remains of lake beds dating back billions of years. In 2004, NASA announced that its rover Opportunity had determined that Mars was “drenched” with liquid water in the past, TIME noted. Through a variety of rock studies, experts were able to determine the prior existence of water on the planet. And as recently as 2012, TIME devoted a cover story to the landing of the Curiosity rover on Mars, and the plan to sample the Martian soil in search of materials that “interacted with water.”

And now it appears that the long search for water on Mars may have finally yielded the hoped-for result—not ice, and not in some past era. In the new study, researchers identified signs of hydrated salts at multiple locations on Mars, which suggests the possible presence of liquid water. “Mars is not the dry arid planet that we through of in the past,” Jim Green, director of planetary science at NASA Headquarters said in a press conference on Monday. “Under certain circumstances, liquid water has been found on Mars.” 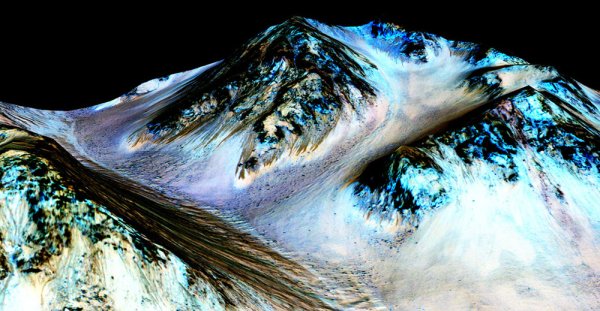 Signs of Water Found on Mars
Next Up: Editor's Pick