Why You Feel Like a Fraud and How to Overcome It

They’re going to realize you aren’t that smart.

Ever heard this voice in your head? You’re far from alone. It’s called “impostor syndrome.”

More than 70% of successful people have felt it at one point.

Are you one them? Ask yourself these questions.

And even if you haven’t heard that voice in your head, someone you care about almost certainly has. It plagues successful women; Sheryl Sandberg wrote about it in her bestseller, Lean In.

I’ve posted a lot about how to be more successful. But the interesting thing about impostor syndrome is that you already are successful. You just have trouble accepting it.

People with impostor syndrome have trouble “internalizing competency.” You can see the achievements on your resume but you’re emotionally disconnected from them. The story the resume tells and the story you tell yourself don’t line up for you.

What Is Impostor Syndrome?

Why do so many know-it-alls really know nothing while so many smart people are unsure of themselves? It’s a serious question. Bertrand Russell once said:

Psychologists found an answer: it’s called the “Dunning-Kruger effect.” Basically, inept people don’t have enough experience to properly evaluate how little experience they have, so they think they’re brilliant when they’re not. (Think about the people at the beginning of every season on “American Idol.” Yup. Bingo.)

On the other hand, experienced people realize how often they’ve been wrong in the past and will sometimes second-guess themselves — even when they’re right. Jessica Hagy illustrated it perfectly like this:

And tons of very successful people you’re familiar with have voiced these feelings.

What’s even more ironic is that not only do very talented people often have impostor syndrome, but they are actually less likely to really be dishonest. People with impostor syndrome turn out to be more honest than average.

Some studies show it’s equally common in males and females but others have found it’s much more prevalent among women. The term “impostor syndrome” was coined in a study of high-achieving women by Pauline R. Clance and Suzanne A. Imes.

Sheryl Sandberg summed up a number of the studies showing women consistently underestimated themselves at work and school.

Why might impostor syndrome be such an issue for women?

And when you’re not an outsider, these effects often go away.

And reality can follow feelings; when you feel powerless you actually perform worse on cognitive measures. Feeling marginalized actually (temporarily) makes you dumber.

And if you’re in a situation where stereotypes say you shouldn’t do well, you perform worse. Are girls worse at math than boys? They definitely are if you remind them that they’re girls.

And this goes for men too.

So when you’re feeling like an outsider or are dealing with negative stereotypes about your abilities it can lead to impostor syndrome. But if you actually are performing well, why can’t you accept it and break free? There’s a reason…

Studies show impostor syndrome is related to anxiety and intense fear of failure. So you race to keep up the facade… but when you work hard to make sure you’re not found out, it only reinforces the impostor belief.

You fooled them again. But next time you might not be so lucky.

You keep working harder but never feel better. As Jim Carrey once said about his own impostor syndrome and subsequent hard work:

But now not only are you feeling bad and overworking but you’re also alone. You can’t tell anyone your “secret.” You feel like you can’t ask for help because you’ll look incompetent.

In the end, it’s exhausting. Working hard, afraid of being “found out” and not being able to turn to anyone is enormously stressful. Eventually you may see self-sabotage as the only way out.

But there are ways to get over impostor syndrome. Here’s how…

Drawing on the research of Carol Dweck, one study recommends focusing on learning instead of performance.

Focusing on improvement means you know you’re not perfect but you know you can get better. With that attitude, you can. And if you fail, hey, you learned something.

But focusing exclusively on performance goals means anything less than perfect is death. That’s incredibly stressful and pushes you to do things that are extreme, unhealthy and maybe unethical.

(To learn the neuroscience behind 4 rituals that can make you happy, click here.)

So if you’re focused on learning, what should your goals be?

Microsoft software has bugs. And they know it. And that’s okay. Valerie Young quotes James Bach as saying:

If they tried to make it perfect, it would never be finished. Ever. So they focus on “good enough.”

Research shows increasing self-compassion has all the benefits of self-esteem — but without the downsides.

(For more on how to build self-compassion, click here.)

Learning goals and “good enough” can help but they’re not the silver bullet. This is…

3) Take Off The Mask

At its essence, curing impostor syndrome is simple: take off the mask. Don’t be an impostor. John Churton Collins said:

The pressure, the pain, the discomfort all come from the secrecy. But, as we established, 70% of successful people have felt like this at one point and a substantial number are feeling it right now. So…

You are the majority. But the pain is caused by not talking to all the others who are just like you.

No, you don’t have to email everyone at your company or school, subject line: I’M A FRAUD. No self-flagellation with a cat-o’-nine-tails is necessary. You just need to tell someone how you’re feeling.

You suffer in silence because you’re silent.

Via The Imposter Phenomenon in High Achieving Women: Dynamics and Therapeutic Intervention:

It doesn’t have to be a therapy session. It can just be a chat:

Talk to someone you suspect may be dealing with or may have dealt with impostor syndrome. Someone that can relate. When you share your feelings, three things happen:

And that’s how the spell is broken.

(To learn the lazy way to be awesome at life, click here.)

It may not happen immediately, but sharing with someone else and realizing how common this is is a huge first step.

Still think you’re alone? 210,000 people get my weekly newsletter. That’s a lot of people. You don’t think I’ve said to myself: I’m writing this in my underwear while drinking cold coffee… why in the world would anyone take me seriously?

Here’s how to overcome impostor syndrome:

So what’s the best first step?

Schedule an unmasking. Right now. Send an email to someone you think will understand and set a time to sit down and talk.

Join over 210,000 readers. Get a free weekly update via email here. 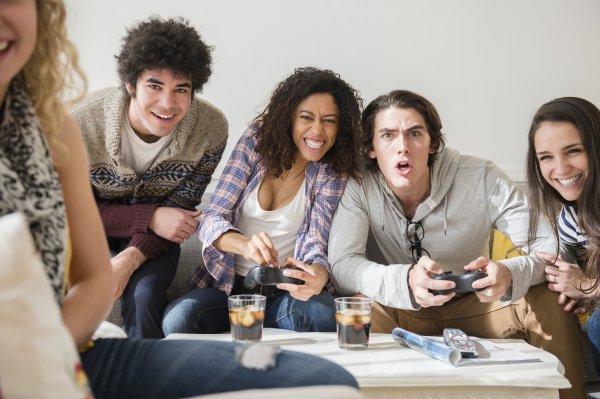 Why Playing Video Games Can Actually Be Good for Your Health
Next Up: Editor's Pick