The autumn before the Iowa caucuses all eyes are usually out on the campaign trail, with Presidential politics overshadowing anything that might be happening in what is usually a fairly sleepy Washington. Not so this year thanks to House Speaker John Boehner’s abrupt resignation, which has served to tear up the legislation and political calendars.

Boehner’s October 30 departure has set off two racing clocks: first, a legislative one as he seeks to “clean the barn up a little bit before the next person gets here,” as he told Face the Nation on Sunday. On the table: funding for the government for the next year, raising the debt ceiling, funding the Ex-Im bank, a multi-year transportation infrastructure bill, tax extenders vital to the business community and a reauthorization of the Federal Aviation Administration.

Clearing all these decks in the next month would take a herculean effort by the Speaker and, given that most would have to pass on the backs of Democratic votes, it could “flare up some tender wounds,” said Rep. Pete Roskam, an Illinois Republican. But, given his imminent departure, Boehner no longer cares much about such wounds.

The second clock is the leadership race expected to happen after Boehner leaves. And the jockeying has already begun. Majority Leader Kevin McCarthy is Boehner’s likely successor as Speaker, but as he moves up a rung, the positions under him are all already in flux. Republican Whip Steve Scalise, a Louisiana Republican who won his seat last year in the wake of former Majority Leader Eric Cantor’s surprise primary loss in a nod to the growing power of the right flank, of which Scalise was a vocal part, should theoretically move into the No. 2 slot of majority leader. But Scalise has been plagued by accusations of racism after it was revealed he’d spoken before a white supremacist group in 2002. Scalise said he did not realize the group’s affiliation at the time.

Scalise could face a challenge from the current No. 4 House Republican, Washington Republican Cathy McMorris-Rodgers, the highest-ranking Republican woman on the Hill, or from Roskam, who is close with McCarthy. Roskam and McCarthy together wrote the 2010 Pledge to America, the GOP’s updated Contract with America, that helped the party win the majority. And Roskam served as McCarthy’s chief deputy when McCarthy was whip from 2011 to 2014.

Read More: This Is the Prayer John Boehner Read at His Resignation

It is still early in the race and, of course, there are other positions: Republican Whip, the No. 3 slot, and House Conference Chair, the No. 4 slot. The question is how much of a challenge McCarthy, Scalise, McMorris-Rodgers and Roskam might have from the party’s right flank, whose discontent led to Boehner’s departure. Boehner was facing a potential no confidence vote before he resigned and on Sunday he warned his rank-and-file against believing in empty promises from “false prophets” on the right.

Boehner’s ambitious legislative agenda in the next 30 days could be complicated by McCarthy’s race to succeed him. As majority leader McCarthy runs the House floor, but much of his time will likely be absorbed by campaigning to ensure he has to votes to become speaker and to get his team elected to the positions he’d like to see.

In a bid to slow at least one of these racing clocks, Roskam has won support for the conference to meet for an extended session next week to take a breath and examine how they got here and where they’re going.

“We’ve just had a speaker step down because he didn’t enjoy the support of enough members to move forward, and that is incredibly consequential thing. It’s something we need to think about and discuss,” Roskam said. “Because if we don’t deal with this, in four to six months time the shine will be off the penny of the new leaders and we’ll be right back where we are.”

But both clocks are already counting down and a crowded presidential field is complicating both processes. Time for GOP introspection might be as hard to come by as unity for a party that is fighting itself as much as it is the clock. 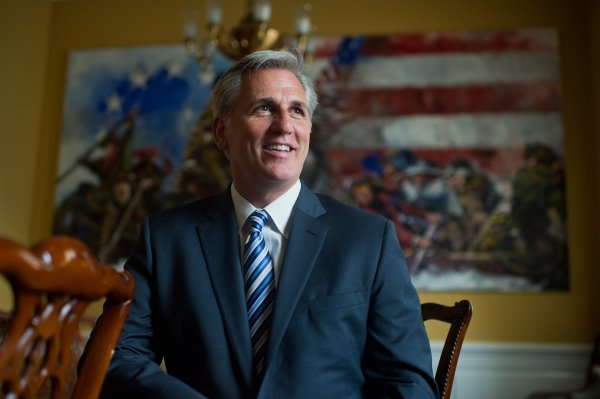 Meet the Frontrunner to Replace Speaker John Boehner
Next Up: Editor's Pick