Modi Breaks Down in Tears Discussing Mother at Facebook Event

Narendra Modi, Prime Minister of the Republic of India speaks the United Nations Sustainable Development Summit to the at the United Nations General Assembly in New York September 25, 2015.
TIMOTHY A. CLARY—AFP/Getty Images
By Justin Worland

Indian Prime Minister Narendra Modi broke down in tears Sunday discussing the role his mother played in allowing for his success with Facebook CEO Mark Zuckerberg.

“When we were young, what we did to get by: we went to our neighbors’ houses nearby to clean dishes, fill water, do hard chores. So you can imagine what a mother had to do to raise her children. What she must have gone through,” said Modi in a broken voice. “That’s not just the case with Narendra Modi. In India there are hundreds of thousands of women and mothers who sacrificed their entire lives for their children.”

In his answer, Modi also praised Zuckerberg’s parents for raising a child who changed the world and said he was confident that mothers would “give us strength to remain on the right path.”

Modi’s remarks come during a question and answer session with Zuckerberg at Facebook headquarters in Silicon Valley. Much of the session focused on the Internet and social media, which Modi has utilized to mobilize his supporters. Modi said he hoped to build a optical fiber network to provide villages across his country with internet.

Modi’s visit to the United States included a trip down the West Coast. On Monday, he is scheduled to attend meetings in New York City, during the United Nations General Assembly. 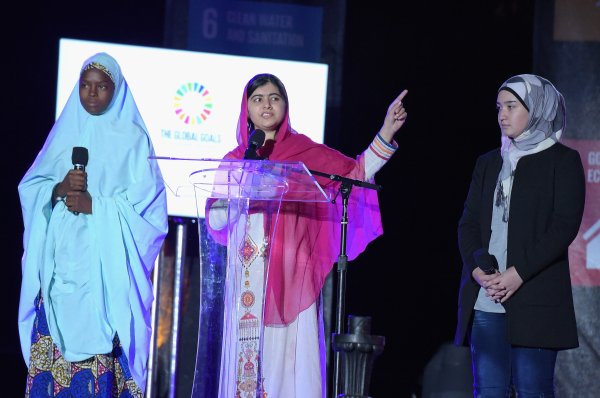