Hillary Clinton endured tough questioning in a Sunday interview over the controversy over her email usage, conceding that the prolonged release of news has been like a “drip, drip, drip” on her candidacy and maintaining that she has sought to be as transparent as possible in dealing with the blowback.

Speaking with NBC’s Chuck Todd on “Meet the Press,” Clinton said she “can’t control” much of the news around the email usage.

“There’s only so much I can control,” Clinton said in the interview. “Look, I think I have done all that I can to take responsibility, to be as transparent as possible in turning over 55,000 pages in turning over my server and to testify on October 22.”

Clinton compared the barrage of criticism over her email server to accusations from the 1990s when her husband was president. “I have been involved from the receiving side in a lot of these accusations,” Clinton said. “In fact as you might remember during the ’90s there were a bunch of them all of them turned out to be not true, that was the outcome.”

Her interview came a day after Bill Clinton defended her separately and blamed Republicans for the attacks on his wife, arguing that the controversy over the emails is overblown.

Clinton used a personal email server during her time as secretary of state, which was an unusual practice among State Department officials but did not violate any rules. She then deleted thousands of emails from her server she says are work-related, and turned over 55,000 pages of emails to the State Department.

When asked whether any work-related emails would be found among the deleted emails on her server—intentionally deleting federal records is a crime—Clinton said again that all the emails were culled by her lawyers.

“All I can tell you is that when my attorneys conducted this exhaustive process, I did not participate,” Clinton said. “I did not want to be looking over their shoulder.”

Clinton also defended herself against criticism that she has changed her views to adjust to the majority’s thinking on a number of key issues, including the Iraq War, gay marriage and the Keystone XL pipeline. The Democratic frontrunner said her shift in opinion reflects changing evidence.

“If we don’t learn, if we don’t make decisions based on best information we have available, well that’s regrettable,” Clinton said. “I am not someone who stakes out a position and holds it regardless of the evidence or regardless of the way that I perceive what’s happening in the world around me.”

“I can’t predict what the Republicans will come up with, what kinds of charges or claims they might make. I have no control over that.” 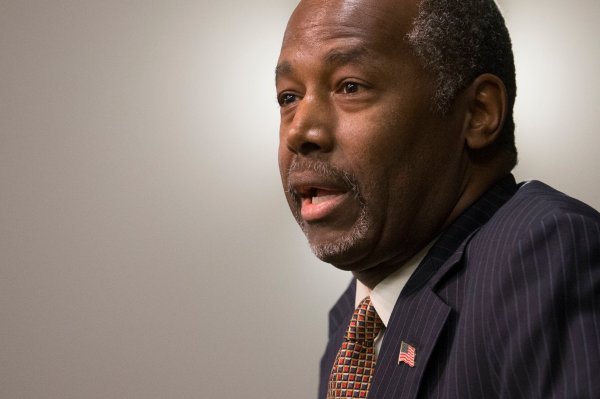 Carson Neck and Neck With Trump in New Poll
Next Up: Editor's Pick