House Speaker John Boehner has had enough. And on Friday at a closed meeting with his Republican members, he told them he plans to retire from Congress and resign his seat effective Oct. 30.

Boehner was facing a no confidence challenge to his leadership from the 40+ members of the conservative Freedom Caucus, who’ve been increasingly frustrated at Boehner’s inability to block President Obama’s second-term agenda, everything from the Iran deal to making a dent in Obamacare. Such a vote would’ve forced Boehner into the arms of Nancy Pelosi and House Democrats in order to survive, a move Boehner was apparently unwilling to make. So, he resigned.

“I woke up and said my prayers as I always do and I said, you know today I’m going to do this,” Boehner told reporters at a Capitol Hill press conference on Friday. “When you’re the Speaker of the House your No. 1 responsibility is to the institution and having a vote like this in the institution isn’t’ very healthy.”

Almost since his first day in office, Boehner has struggled to reign in his right flank. This wasn’t the speakership he’d envisioned. As a young member in the 1990s, Boehner’s sole portrait in his office was of Nicholas Longworth, the last speaker from Ohio. As I wrote in our TIME cover story on Boehner at the beginning of his speakership, he idolized Longworth, who was known for his pragmatism and deal making. But with his hands tied by the Tea Party, there were no deals Boehner could make; His attempts to pass sweeping legislation—a Grand Bargain to reduce long-term deficits, immigration reform, even tax reform—all fell victim to his party’s internal strife.

Boehner, 65, seemed like a man relieved of an enormous burden. He entered the press conference, and exited it, singing “Zip-a-Dee-Doo-Dah.” He talked candidly about having wanted to retire at the end of 2014, he finally admitted publicly for the first time after years of denying rumors. He’d bought a condo in Florida in February 2014, only to see his heir apparent, Majority Leader Eric Cantor lose his seat, another Tea Party casualty, forcing Boehner to soldier on. He then said, he’d only planned to stay till the end of 2015, a plan he was going to announce on his birthday. Nov. 17, but that circumstances had prompted him to move up that timeline. He told his wife and staff this morning. And, he said, he had to tell Majority Leader Kevin McCarthy five times before their scheduled meeting with members Friday morning before McCarthy would believe him.

Boehner, a devout Catholic, on Thursday hosted Pope Francis and, he said, prayed on the decision looming before him. The no confidence vote seems to be the final straw that broke Boehner’s will to remain.

“I really hope they don’t do it,” said former Senate Majority Leader Trent Lott, a Mississippi Republican, told me earlier this week of the vote. “I mean, I’m as conservative as they are, John’s as conservative as they are. We just disagree on tactics. Their tactics make no sense.” Indeed, had Boehner stayed, he likely would’ve been forced to ask for Democratic help—and the pound of flesh that they would’ve extracted would’ve killed his speakership any way. So, he decided, best to move on now rather than beggar his party to the opposition.

Boehner’s exit will likely elevate McCarthy, who took over Cantor’s spot in 2014. “Kevin would make an excellent Speaker,” Boehner said at his press conference. It’s a meteoritic and unlikely rise for the former California deli owner who was only elected to Congress in 2006. “The right flank likes McCarthy,” says one senior House GOP aide. “He has done a lot of work to reach out to them and, fairly or unfairly, they feel he listens more to them than Boehner does.”

Up until Friday, Boehner had been aggressively defending his position, granting an interview with Politico last week to underline his money-raising prowess. But, clearly, his calculations changed this week as he faced the no confidence vote followed by what is increasingly likely to be another government shutdown in late November or early December.

The conference greeted the news with mixed feelings. While some on the right celebrated, others expressed remorse. “Speaker Boehner has led the House through some of the toughest times our country has ever faced and did so with poise, patience, and an unmatched grace,” said Rep. Ed Royce, a California Republican who chairs the House Foreign Affairs Committee. “He will be sorely missed. I thank John for his service to our nation and wish him and Debbie all the best moving forward.” 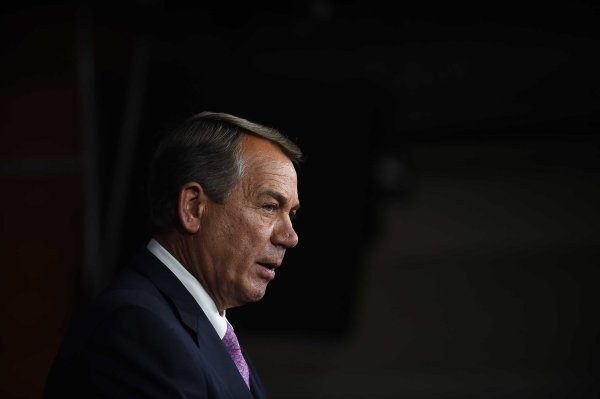