John Boehner, whose four-and-a-half years as Speaker of the House of Representatives were defined as much by clashes with his Republican colleagues as they were by his fights with President Obama, is leaving Congress, an aide confirmed.

Boehner told the House GOP conference Friday morning that he will resign both as Speaker and from his seat representing Ohio’s 8th District at the end of October, Michigan Republican Rep. Bill Huizenga said on Twitter. His forthcoming departure was first reported by the New York Times.

“Speaker Boehner believes that the first job of any Speaker is to protect this institution and, as we saw yesterday with [Pope Francis], it is the one thing that unites and inspires us all,” a Boehner aide said. “The Speaker’s plan was to serve only through the end of last year. [Former Majority Leader Eric] Cantor’s loss in his primary changed that calculation. The Speaker believes putting members through prolonged leadership turmoil would do irreparable damage to the institution. He is proud of what this majority has accomplished, and his Speakership, but for the good of the Republican Conference and the institution, he will resign the Speakership and his seat in Congress, effective October 30.”

His retirement from Congress will end a decades-long political career that saw him rise from back-bencher to third-in-line to the presidency, only to see his Speakership dominated feuds with conservatives who, after being elected in the GOP wave of 2010, often complained that he lacked the will to fight Obama and Senate Democrats on fiscal and social issues. He was under renewed pressure in recent weeks to force a government shutdown over federal funding of Planned Parenthood. 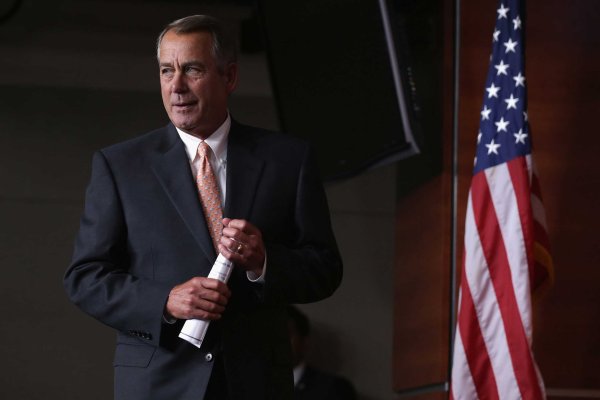 House Speaker John Boehner's Survival Could Give a Win to Democrats
Next Up: Editor's Pick