Today, the U.S. Senate again defeated a measure that would have blocked millions of women, men and young people from essential reproductive health care. In spite of that—and all the evidence that it’s not what the American people want—some extreme anti-women’s health politicians say Planned Parenthood should be “defunded” at all costs.

Even if they have to shut down the U.S. government to do it.

It’s important to know what politicians mean when they talk about “defunding” Planned Parenthood. Birth control, Pap tests, breast exams, testing and treatment for sexually transmitted infections—if their effort succeeds, Planned Parenthood will no longer be reimbursed for these services. And our patients who rely on Medicaid and other public health programs will no longer be covered for these vital, lifesaving services at about 700 health centers across the country.

Many of the most marginalized women will not be able to go to their doctor for the birth control they need to plan their families and their futures, or for a breast exam that could save their lives. Someone like Amanda Howard in Houston, Texas, whose pre-cervical cancer was diagnosed and treated at Planned Parenthood, might not have anywhere else to turn. Thanks to public health programs, Amanda didn’t have to pay a cent for her care.

That is what is at stake as this effort continues.

At least 78 percent of the people who come to us have incomes at or below 150 percent of the federal poverty level—that means for a family of four, they are making ends meet on less than $37,000.

The members of Congress committed to interfering in that care say that our patients can go elsewhere.

That claim—like the videos that led to this most recent attack—has been debunked. In many places where we work, affordable health care options are limited. Places like Texas, where politicians slashed funding for family planning and forced the closure of health centers, leaving close to 30,000 women without care.

Planned Parenthood fills a vital role in building a healthier country. Half of our health centers are in underserved areas. For many of our patients, we are their main source of health care.

According to the New England Journal of Medicine, “The contraception services that Planned Parenthood delivers may be the single greatest effort to prevent the unwanted pregnancies that result in abortions.”

The commitment of Planned Parenthood doctors and educators is part of the reason teen pregnancy rates are at historic lows. Planned Parenthood and our supporters worked hard to make sure that health reform included women—and over 55 million women now have access to no-copay birth control and well-woman exams as part of the Affordable Care Act.

This summer, we watched our supporters rally to stand with us across the country. Thousands of activists and patients contacted their members of Congress, and held events across the country, telling the story of how Planned Parenthood has changed their lives. And in response to recent attempts to block access to care, next Tuesday, September 29, tens of thousands more will be rallying at more than 200 locations across the country and counting. Dubbed Pink Out Day, more than 30 Planned Parenthood health centers will also be offering free STD testing, targeting to areas where we’ve seen an increase in STD rates, or where the care we provide is in danger. And in Washington DC, hundreds of supporters will deliver more than 1.5 million signatures to leaders in Congress, signed by those who have affirmed that they stand with Planned Parenthood.

Leaders in Congress have a choice to make. They can obstruct access to high-quality health care in communities where it is most needed—or they can stand with the one in five American women who has turned to Planned Parenthood for care.

The anti-women’s health agenda of this Congress is a political game. To our patients, the outcome is real life. 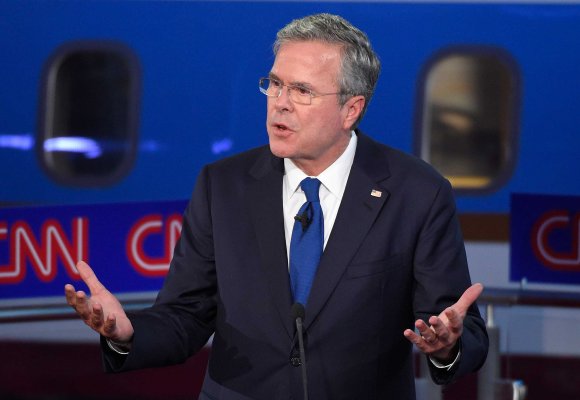 Jeb Bush’s 'Multicultural' Comment Was Not a Gaffe
Next Up: Editor's Pick