Pope Francis, addressed a joint meeting of the U.S. Congress with with Vice President Joe Biden and Speaker of the House John Boehner in the House Chamber of the U.S. Capitol in Washington, on Sept. 24, 2015, urging legislators to work together to solve problems and avoid polarization
Jim Lo Scalzo—EPA
Ideas
By Rep. Adam Schiff
Rep. Adam Schiff is a Democratic U.S. Representative for California's 28th congressional district.

In America these days, we tend to view everything through the prism of transient popularity or politics–who’s up, who’s down, who’s supporting the Democrats or the Republicans. But in Pope Francis, we find someone who transcends the trends or usual divides, and who has used his pulpit to encourage action on the issues that truly matter, informed by nothing but his faith and communion with God.

I am not a Catholic, so it might seem odd for me to be calling for the Pope, the leader of the Roman Catholic Church, to be awarded the Nobel Peace Prize. But that is what is so truly extraordinary about this pontiff. Pope Francis truly talks to the entire world community—not just his flock—exhorting all of us to treat each other as brothers and sisters, rather than separate and distinct communities with interests that don’t transcend our differences.

That’s why I am encouraging other members of Congress to join me in a letter nominating the pope as the 2016 Nobel Peace Prize Laureate. His speech today before Congress only cemented my conviction that he deserves it, even if he would eschew the attention and accolade for himself, rather than a focus on God’s teachings.

First, Pope Francis has been a powerful advocate for peace, urging an end to conflict and support for constitutive ties among nations. He has called on the world to use diplomacy and discussion to solve disputes, rather than military force, coercion or intimidation. This commitment to nonviolence, which the pope has put into practice every day through his words and actions, is at the very core of the principles behind the Nobel Peace Prize.

Second, Pope Francis has worked to galvanize the international community to take on global problems, such as the changing climate and environmental degradation. Pope Francis has brought together at the Vatican policymakers from around the world to build support and consensus around the need for a global response to the challenges facing our planet. Through his stature as a spiritual figure, Pope Francis casts the issue of an unhealthy Earth in religious terms, emphasizing our joint duty to care for the world and to pass on an unspoiled environment to future generations.

Third, Pope Francis has distinguished himself through his courageous stand for human rights and his condemnations of all genocide, both past and present. Most recently, in calling the world’s attention to the persecution of Christians and other minorities in Syria and Iraq, the pope has spoken out against the darkest chapters of human history made possible “by general and collective indifference.”

And finally, as the world struggles to cope with a flood of refugees not seen since the end of World War II, the pope has emerged as perhaps the leading advocate for relief. He made this call yesterday at the White House, and repeated it again today in his address to Congress. The pontiff has urged the international community to respond collectively to this unsurpassed humanitarian disaster, even as he has acted personally to invite a Syrian refugee family to reside in his residence at the Vatican. As he said during his address, “our world is facing a refugee crisis of a magnitude not seen since the Second World War. This presents us with great challenges and many hard decisions.” It is our responsibility to meet those challenges.

When Martin Luther King Jr. accepted the Nobel Peace Prize in 1964, he spoke of hope for a more perfect world: “I believe that even amid today’s mortar bursts and whining bullets, there is still hope for a brighter tomorrow.”

In Pope Francis, we find not only a kindred spirit, but a similarly passionate and convincing voice for our time and for an end to our conflicts. I hope other members of Congress will join our call, and that the Nobel Committee will look favorably on this most humble of servants. 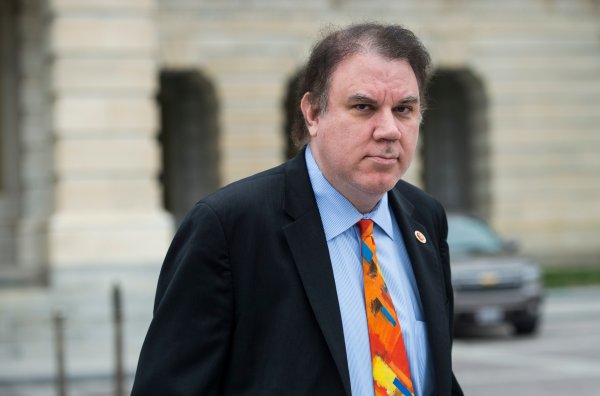 Let's Shut Down Government Shutdowns for Good
Next Up: Editor's Pick