Neither Viola Davis nor the Twitterverse at large have gotten over Davis’ Sunday night Emmy win for Best Lead Actress. Appearing on Ellen Thursday, Davis joked that she’s hardly been able to part with the award. “I slept with it last night,” she laughed. “My husband was like, ‘Viola…’ ”

The real victory for Davis, as she explained, was the fact that her win marked the first for an African American in the category. As such, the award afforded her the opportunity to make a profound statement about race in Hollywood—in her fantastic, emotional acceptance speech, Davis stated:

Host DeGeneres, who complimented Davis’ “perfect” speech, asked the actress the question on all of our minds: Did Davis prep for it beforehand? “Well, you know, sort of,” said Davis. “I love that Harriet Tubman quote, I thought it was so progressive. And I started [quoting] it, and my husband said afterwards: ‘V, I didn’t know where you were going with that. I really didn’t. When you were saying those white women with their arms stretched out over the line, I was like, ‘What is she doing?’ ”

“I was too for a minute,” laughed DeGeneres. “At first I thought you were drunk, maybe.”

Davis—who admitted she did have a bit of Prosecco beforehand—said that after her groundbreaking speech, all she could think about were the McDonald’s fries backstage. “I ate them as if I hadn’t eaten in five years,” she said. “Yeah, well, when you’re drunk you do things like that,” joked DeGeneres. 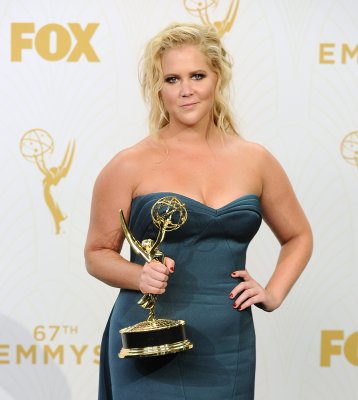 Amy Schumer's New Book Title Will Exceed Your Expectations
Next Up: Editor's Pick