In speaking to Congress on Thursday, Pope Francis demonstrated that he’d brushed up on his American history in advance of his historic visit to the U.S. In mentioning a few famous Americans whose lives could serve as inspirations as the world navigates current crises, he turned to two obvious choices—Abraham Lincoln and Martin Luther King—and two whose names might be unfamiliar to those less versed in the history of American religion: Dorothy Day and Thomas Merton.

So who were they?

Dorothy Day was the founder of the Catholic Worker Movement, who used her faith to work for social justice. In 1940, TIME noted that, “Among U. S. Christians who care for the poor, none are more blessed with selfless zeal than those Roman Catholics who labor in the Catholic Worker movement.”

When she died in 1980, TIME explained that her take on Catholic activism was anything but uncontroversial:

Though she was raised Episcopalian and became an agnostic in her youth, as she “took a Marxist lover, joined the young labor movement and wrote for far-left newspapers like the Masses,” a relationship and the birth of her daughter led to the church. In the 1930s, in the depths of the Depression, she launched the periodical The Catholic Worker and a philosophy to go along with it: pro-union, anti-poverty, pacifist, anti-government. She even went so far as to refer to it as anarchism, believing that individuals could be empowered to do good on their own.

Merton, who came from a similarly non-Catholic background, became a Trappist monk and best-selling author who encouraged peace. As his 1968 TIME obituary made clear, his focus was parallel to Day’s—he “found in the Word a command to do”—but it was through writing that he shared his philosophy with the world:

When The Seven Storey Mountain was first published, TIME called it a “perceptive, quietly stirring” reminder that “the most mystical human beings are often among the most practical as well.”

While Day’s activism was very much tied to the 1930s moment in which she got her start, with its focus on workers and soup kitchens, Merton’s fit perfectly with the post-World War II world in which his autobiographical debut was published. Though Merton lived the life of a near-hermit for many years, he became fascinated by Zen Buddhism and Tibetan monastic practices right about when the Beatles did too, and he participated in protests against the Vietnam War.

Though their lives took very different paths, Day’s and Merton’s callings overlapped significantly, with a concentration on anti-poverty and pro-peace activism. In light of that parallel, one they share with another famous Catholic, it’s no wonder Pope Francis would have mentioned their names—even if they’re less famous than Lincoln and King. 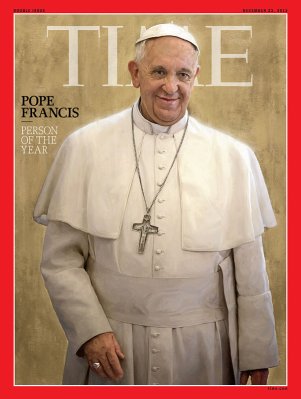 See Every Pope Who's Ever Been on the Cover of TIME
Next Up: Editor's Pick