Germany’s BMW Could Have an Emissions Problem Too

Shares of automaker BMW slid Thursday morning after a German-based automotive publication released an article that said the emissions of one of BMW’s car models were higher than levels allowed in Europe under standardized testing conditions, according to a report in The Wall Street Journal.

The report stoked investor worry about BMW since the revelation follows the still unfolding scandal at Volkswagen. On Wednesday, Volkswagen’s CEO Martin Winterkorn resigned following the company’s confession that 11 million of its vehicles are loaded with software designed to subvert emissions tests.

Auto Bild, the auto magazine, said Thursday that BMW’s X3 xDrive 20d SUV, which runs on diesel, emitted levels of nitrogen oxide in standardized conditions that were 11 times more than what’s allowed by the European Union. The publication said in a pre-release of an upcoming article that the results came from a street test by the International Council on Clean Transportation, a nonprofit research group.

The Journal reported that test performances and road performances often result in different levels of emissions. BMW told the newspaper that it had not manipulated test results, and that it was unfamiliar with the test mentioned by Auto Bild. Since the company had no specific details of the test it could not explain the results. 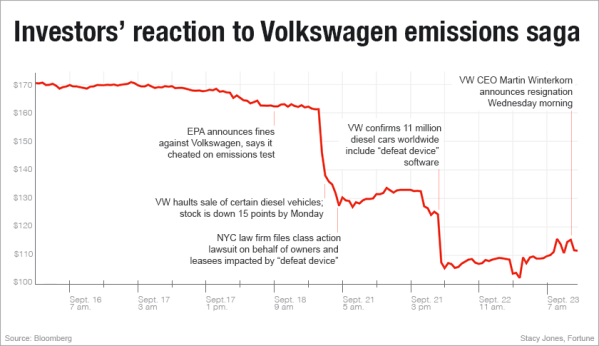 Here’s a Timeline of Volkswagen’s Tanking Stock Price
Next Up: Editor's Pick