Pope Francis is no stranger to institutions of power. When he speaks to the U.S. Congress on Thursday—from the same spot where Presidents give the State of the Union—he is not on as foreign a ground as one might think. If anything, the moment just echoes his experience since becoming the Bishop of Rome: the dome of Saint Peter’s Basilica is twice as large as the U.S. Capitol, centuries older, and is the center of the globe’s most far-reaching empire, one billion strong.

Consider the scene in Rome the Sunday before Pope Francis left for Cuba and the U.S. The dome of Saint Peters consumed the blue Roman sky. Towering white columns of the square around penned the thousands of pilgrims who packed the piazza to hear the Pope’s Sunday address.

When Francis finally appeared, he was but a dot in an Apostolic Palace window hundreds up feet above. “Viva Papa!” a group of schoolchildren shouted, trying to get his attention. Others held enormous banners with soccer slogans. But it was in vain. Francis was too far above them all, holding court where his forefathers have stood. He asked the people below a question Jesus asked in the Gospels: “‘Who do you say that I am?’”

Read More: Why Immigration Is Different for Pope Francis

If architecture reveals theology, it is hard to miss message of the Vatican: the Church of old is a fortress that keeps the Pope above the people. Now, two after two and a half years of Francis—the People’s Pope—Saint Peters has never looked more out of place. The visual of the People’s Pope, and his Church, seated there is just bizarre. The question—“‘Who do you say that I am?’”—is ringing louder and louder in his Church.

It is another reason that Francis’ travels matter so much. On the road he gets to meet his people and share glimpses into their lives. He can stop for selfies with school children, even if it means making the President of the U.S wait. He can stop his motorcade to bend down and kiss a disabled child. He can scratch his prepared remarks, as he did in Cuba, when he heard the moving testimony of a nun in Havana, and speak whatever the Spirit moves him to say. He is free to be who he wants his Church to be, and with the people of the Church themselves.

It would be a mistake to view Washington as Francis as a U.S. politician, a candidate looking for a vote. His mission is far bigger than that. As his brief speech at the White House showed, his political opinions do not fall neatly into the left-right divide. He reminded reporters on the way to the U.S. that his only ideology is the church’s doctrine, while his address to U.S. bishops showed that he is as concerned with pastoral matters here as he is political ones.

Speaking to Congress is really just another moment to practice for his bigger goal. America is not his to reform. Saint Peters however, that’s a different story. 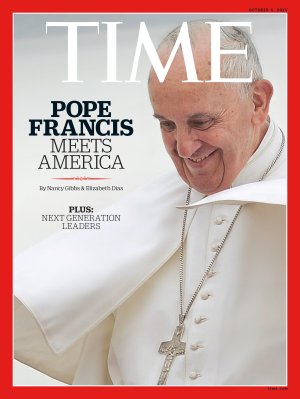