Marco Rubio Earns His Place in the Republican Top Tier

At the second Republican presidential debate, Donald Trump and Jeb Bush were in the midst of a testy wrangle over whether it’s appropriate for presidential candidates to speak Spanish in public. “I want to tell you a story about someone who didn’t speak English that well,” Senator Marco Rubio interrupted, slicing to the argument’s core. “It was my grandfather.” He went on to explain that his grandfather was a Cuban exile who taught him to love America. “But he taught me that in Spanish,” Rubio explained, “and he became a conservative, even though he got his news in Spanish.”

Case closed. And enter Marco Rubio, stage right, into the top tier of Republican candidates. Most of the praise after the debate went to the clever, succinct Carly Fiorina and her successful put-down of Trump’s assessment of her face. But Fiorina’s performance had gaping holes in it–specifically, her riveting, untruthful description of an abortion video that did not exist. Her skirmish with Donald Trump over who had the better business record was the functional equivalent of Greece and Syria arguing about who had the stronger economy. Both are snake-oil marketers, not managers. Meanwhile, Rubio has had two excellent debates now. He tells stories, which is good. He is selling youth–he is 44, but looks younger–and optimism, which is better. The substance of some of his remarks, especially on national-security policy, is questionable, but he has emerged as a plausible President at a moment when most of his competitors are demonstrating their implausibility.

We have reached a new stage of the Republican nominating process. The field is beginning to sort itself out; the sudden departure of Scott Walker was symbolic of a sea change happening within. Trump has become–dare I say it?–boring. Dr. Ben Carson’s weirdness is showing. The tortoises are consolidating their positions–Ted Cruz on the right, Bush and Ohio Governor John Kasich in the middle. And then there is Marco Rubio, who stands to the right of the moderates but manages to convey his conservatism without vitriol, and has emerged as the most polished orator of the bunch.

After the debate, I spent a day on the trail with Rubio in Georgia and North Carolina. The crowds were not Trumpian in size or in any other sense–much of the audience wore business attire; there were few tattoos or heavy-metal T-shirts; there were significant numbers of young people and Latinos. His stump speech was sleek and bright: the sky was not falling. He talked more about the future than about the past. After telling his up-from-Cuba life story, he focused on three specific policy areas–the economy, higher education and national security. He talked about the emerging economy, rather than the manufacturing jobs lost: “It took the telephone 75 years to reach 100 million users. It took Candy Crush one,” he said, referring to the popular video game. He talked about Airbnb, Uber, Amazon–companies that embody the lightning pace of change. His plans to encourage that sort of entrepreneurialism were standard-issue Republican: lower taxes, fewer regulations. But his vision was more compelling than the other GOP economic pitches I’ve heard this year. It flowed naturally into the higher-education section of the speech, which was truly creative, with its emphasis on vocational-skills training and specific ideas for reforming the student-loan mess. Rubio would no doubt be horrified to learn that the only other candidate I’ve heard as passionate about technical-skills training is Hillary Clinton.

Rubio has distinguished himself in the debates by sounding knowledgeable about national-security issues–but his views are, again, standard conservative fare and sometimes dead wrong: the Iranians, for example, will not be able to process plutonium under the terms of the nuclear deal. Obama, he says, “treats the Prime Minister of Israel with less respect than he does the Ayatullah of Iran,” a line that might please neoconservative billionaire Sheldon Adelson, but bears no trace of reality to the unprecedented level of support the U.S. has given Israel during Obama’s presidency. Rubio didn’t take questions–not even from his audiences–but I’d love to ask him how much time he’s spent with the Israeli military and intelligence community, which holds very different views about Israel’s security than Benjamin Netanyahu does.

There is a distinct feeling among Republicans that if they can create a ticket with candidates from Florida and Ohio, they can win the election. But neither Bush nor Kasich is setting hearts aflutter yet. It remains to be seen if Rubio will become a bonfire or a campfire, but he is beginning to throw some heat. 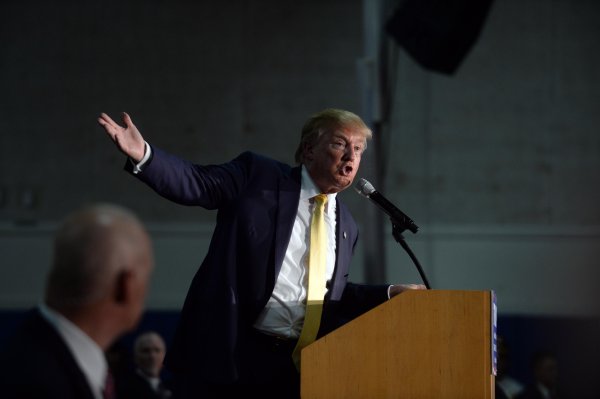 Trump Defends Treatment of Anti-Muslim Comments
Next Up: Editor's Pick