A Star Crosses Hollywood Boundaries at the Border

British-born actress Emily Blunt, 32, has a request for male screenwriters. “Write me as a guy,” she tells TIME, “and I’ll do the girl stuff. Just write me as you would a guy: as complicated, as conflicted, as at-fault.” It’s something she’s learned to ask for. “Often,” she says, “you see these female roles written, and I feel as if a male writer writes them to protect a feminine ideal.”

In Sicario (out now in limited release and Oct. 2 nationwide), Blunt’s wish is granted. She plays Kate Macer, an FBI agent drawn into an investigation after stumbling into a drug cartel’s grisly house of horrors during a raid. The case is far enough above Kate’s pay grade that her ideas about right and wrong are irrelevant to the morally compromised men she’s paired with, played by Josh Brolin and Benicio Del Toro. Sicario–the title is Spanish for “hit man”–has a lot to say about chaos at the border. Yet its most striking aspect may be Blunt, who brings girl stuff to the center of the law-enforcement drama, a space usually reserved for men.

Screenwriter Taylor Sheridan, who had no writing credits to his name before Sicario, was pressured by potential backers to change Kate’s gender, but he held firm. Kate’s ambivalence and, later, her horror show us how messy drug enforcement has become. “The fact that I’m a woman magnifies it for the audience,” says Blunt. “If there’d been a guy playing my part … maybe we’ve seen that film before.”

Viewers haven’t seen this before, from the movies–where the closest comparison is Jodie Foster’s steely Clarice Starling in The Silence of the Lambs, who’s able to master the sort of ambiguities that trip Kate up–or from Blunt. The 32-year-old came to prominence in costume dramas like The Young Victoria (“I think I donned a bonnet several times,” she says) and as Meryl Streep’s mean-spirited assistant in The Devil Wears Prada. None of her roles has found her tending to a genius husband or playing the straight girl to a funny boyfriend. “If I’m just there to lay up the joke, I don’t really have much interest in playing parts like that,” she says. “I just don’t think it’s the reality of the world.” Blunt’s a rare actress who consistently plays the lead, not the love interest.

Which makes things complicated when it’s an FBI story, where the reality is a man’s world. Kate isn’t a character who just happens to be a woman; her relationships with colleagues and her physical capabilities are cast into relief by her femininity. Indeed, though Kate is good at her job, working in moral gray areas affects her much more than it does her male colleagues. To research the role, Blunt spoke to four female FBI agents; one of them inspired her unshowy performance. “She was quite slight in size,” Blunt says. “She reminded me of how I would look in this very brutal world.”

Blunt proved her mettle as an action hero after her star turn in 2014’s clever blockbuster Edge of Tomorrow. There, she averted the end of the world, splashily and with Tom Cruise playing her sidekick. The one-two punch of Tomorrow and Sicario (to be followed by the fairy-tale action sequel The Huntsman next year) suggests that Blunt may be a successor to the Angelina Jolie of 10 years ago: an actress who’s willing to take on physically demanding roles and who’s credible while toting a gun.

In Edge of Tomorrow Blunt played an indomitable fantasy figure. In Sicario, when Blunt gets hit by a male adversary, you feel the hurt. And when her values are discarded out of hand by male colleagues, there’s no way for her to fight her way out. It’s a role a lesser movie might have sanded down, either by making Kate “butch”–as Blunt says she resisted–or by granting her some gratifying wins along the way.

But the script gives Kate the guy stuff, which means forcing her through wrenching internal conflict and external trauma, while Blunt adds the girl stuff with an impressively shaded performance. Is she comfortable being labeled our next great action star? “It’s a thrilling thing,” she says, “and one that probably persuades me to lay down the gun for a little bit.” 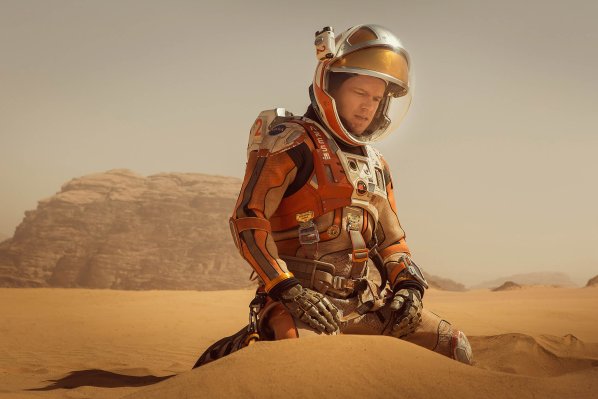 The Martian Celebrates the Gutsy Ambition That We’ve Denied the Real NASA
Next Up: Editor's Pick