Kareem Abdul-Jabbar: Ignorance Vs. Reason in the War on Education

When I started playing basketball as a freshman at UCLA, coach John Wooden told us a bunch of crazy ideas about useless drills we should do and half-baked plays we should run. Naturally, because I had just graduated from high school, I immediately knew that his unfamiliar methods were silly — possibly even unpatriotic — so I refused to follow the ridiculous directives. I suggested we start every practice by sitting in a circle discussing our favorite jazz musicians, leading to a group hug and affirmations that we were special to the universe. Coach Wooden later thanked me, tears in his eyes, for making him a better coach — and a better human being. The rest is basketball history.

If I had actually refused to follow the coach’s plan, the next day I’d have been stocking the high shelves at the pet store asking, “Are you sure five pounds of kitty litter is enough, ma’am? Don’t forget our lovely assortment of chew toys.” And rightfully so, because, despite having been one of the top high school basketball players in the country, what did I know about playing on the next level? Or, for that matter, the next level of history, math and English? I had to rely on experts.

Yet there seems to be a growing belief among college students, and some fearful parents, that being exposed to anything that challenges the comfort zone of beliefs might infringe on their rights. Teachers are free to explain facts, like how the intestinal tract works, but not to offer ideas that might be unpopular, provocative or disturbing.

Last month, a freshman at the University of North Carolina at Chapel Hill wrote an article criticizing a Literature of 9/11 course for requiring reading that “sympathizes with terrorists.” The student hadn’t taken the class nor read the actual works, but relied on his personal research to form his conclusions. At Duke University, some students objected to the school’s Common Experience Summer Reading Program selection, Alison Bechdel’s powerful and moving graphic novel Fun Home, a musical adaptation of which is currently a hit on Broadway. They said that they found it pornographic and contrary to their moral beliefs because of its portrayal of homosexuality.

If these were isolated cases, we could just shake our heads sagely at youth’s age-old insistence on their Entitlement to Ignorance and pull out one of my favorite quotes (often attributed to Mark Twain): “When I was a boy of 17, my father was so ignorant I could hardly stand to have the old man around. But when I got to be 21, I was astonished at how much he had learned in four years.” But these students’ public attacks on required reading aren’t merely a hold-their-breath tantrum while they refuse to eat their vegetables, they are a reflection of a larger hostility in American society against education—and against educated experts.

That may seem like an odd statement about a country that in 2015 has a federal budget of nearly $70 billion for education. Clearly we are serious when it comes to educating our young, but how we do so and what we teach them are problems.

For many Americans, education is about feeding students certain factual information, then testing them to make sure they retain it. The higher they climb on the educational ladder, the more specialized that information becomes as we train them for their eventual professions. That makes sense. When you’ve got surgeons hovering over you, ready to mess with your internal organs, you want them to remember where everything goes when they’re done, not thumb through Wikipedia on an iPhone.

The attack on education isn’t on training our youth for whatever careers they choose, it’s on teaching them to think logically in order to form opinions based on facts rather than on familial and social influences. This part of one’s education is about finding out who you are. It’s about becoming a happier person. It’s about being a responsible citizen. If you end up with all the same opinions you had before, then at least you can be confident that they are good ones because you’ve fairly examined all the options, not because you were too lazy or scared to question them. But you—all of us—need the process. Otherwise, you’re basically a zombie who wants to eat brains because you don’t want anyone else to think either.

That means this is a war on reason. And the generals leading the attack are mostly conservative politicians and pundits who have characterized our greatest thinkers as “elitists” who look down on everyone else. Uber-conservative William F. Buckley once said that he’d rather entrust the government to the first 2,000 people in the Boston phone book than to the faculty of Harvard University (he graduated from Yale). That’s a great sound bite that many would applaud as the triumph of street-level common sense over the egghead experts who are often viewed as impractical and removed, as if they didn’t share experiences in love and grief and raising children and paying mortgages. Were he alive today, would Buckley say that after reading a 2014 poll by Alex Theodoridis of the University of California, Merced, in which 54% of Republicans polled think President Obama is a Muslim “deep down” (10% of Democrats and 25% of Independents agreed)? Yet Obama has always been publicly affiliated with Christianity and there is not one fact to suggest he’s Muslim. Or what about the recent Iowa poll in which 57% of Republicans said they would trust the top candidate to “figure it out” once in office.

Since when did we stop requiring our political leaders to educate themselves on issues before deciding the best course? Instead, we demand they hold a course regardless of facts. If you want to see how little regard politicians from both parties running for President have for facts, go to FactCheck.org and read statements made by all politicians. We should insist that politicians demonstrate their ability to reason through specific policies.

Embracing reason is an uphill battle for humans. Almost 400 years ago, philosopher Francis Bacon wrote, “The human understanding when it has once adopted an opinion … draws all things else to support and agree with it. And though there be a greater number and weight of instances to be found on the other side, yet these it either neglects and despises….” Recent studies explain why nothing much has changed since then. During the 2004 presidential campaign, Emory University psychologist Drew Westen and his colleagues did brain scans on 15 Bush supporters and 15 Kerry supporters. What they discovered was that when the subjects rejected evidence contrary to their beliefs, their brains lit up like addicts when they get a fix. Westen said, “Essentially, it appears as if partisans twirl the cognitive kaleidoscope until they get the conclusions they want, and then they get massively reinforced for it.”

We seem hardwired to discard information that contradicts our beliefs. We have the Internet, the single most powerful information source and educational tool ever invented, but many of us use it only to confirm conclusions we didn’t arrive at through examining evidence. We go only to sites that agree with our position in order to arm ourselves with snippets that we can use as ammunition against those who disagree with us.

The students who refused to read assigned texts were right about one thing: we should always question authority and experts. We know how often experts have been wrong in the past. (Remember ads with doctors touting the health benefits of smoking?) But colleges and universities provide the perfect learning environment for challenging beliefs. Part of what they teach is the proper way to challenge something: first, read the book. Second, present arguments contrary to the reading. Third, provide support for those arguments in the form of authority, facts and statistics. The students not reading the works aren’t really students; they prefer emotional rhetoric to reasoned argumentation. A UNC student who identified himself as a conservative “through and through” posted this comment to the original piece that attacked the Literature of 9/11 course: “[T]hrough most of the semester and even in my final paper I actively disagreed with some of Neel’s [the professor’s] opinions. He in turn welcomed my arguments. As such, this course was amazingly valuable because it challenged my opinions and allowed me to explore what I thought I knew in a deeper way. Which is exactly what education should do.”

Reading is about context, which a teacher can provide. Not just the work itself, but the social climate that inspired its creation, the subtle but complex ideas that a novice might overlook, and the effect on people at the time and yet to come.

When I think of some of the beliefs I had when I was 19 and how different they are now that I have had more experience and education (both formal and self-induced), I’m astounded by how rigid I was. The joy of college is arguing with others who are equally passionate and informed but disagree. It develops empathy for others and humility in yourself because you now will look upon your opponents not as evil idiots but as good people who want the same thing as you: a safe, loving, moral community. If you don’t want to read the books and develop the skills, don’t take the class. Don’t attend the college. Spend the rest of your life huddled among those who agree with you. But know that that is not thinking—it’s sleeping. Perhaps the Beatles said it best: “Please, don’t wake me, no, don’t shake me. Leave me where I am, I’m only sleeping.” 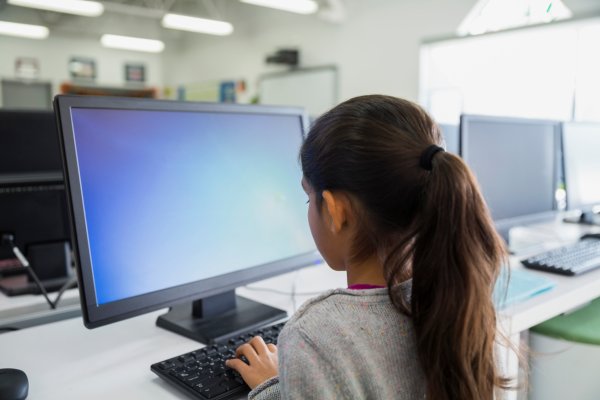 How to Get More Girls Into Computer Science
Next Up: Editor's Pick