Who knew late-night TV politics were this dramatic?

Jimmy Fallon stars in a hilarious new sketch for the Tonight Show called “Jimpire”—which is basically the greatest Empire parody ever.

The hit Fox series’ first season kicked off with family patriarch Lucious Lyon (Terrence Howard) discovering that he is ill and must choose a replacement for his successful record label. On Tuesday night’s sketch, Fallon follows suit: The late-night host, with his injured finger, spends the 10-minute segment deciding who will be the heir to his Tonight Show empire.

“I’ve been telling jokes since I was 9 years old in Brooklyn,” drawls Fallon, clad in a classic Lucious Lyon suit, turtleneck and purple paisley silk neck scarf. “It was these jokes, these funnies, these ha-has that kept me warm at night growing up in the street.”

“It was jokes like these that made me the man I am today,” Fallon continues. “Juicy Jim, head of the Tonight Show empire. Now, I might not be around forever, what with my finger being in the condition it is, who knows what could happen tomorrow? I could stub my toe, I could bite my tongue. I could burn the roof of my mouth eating a hot microwave pizza. The point is, I need to entrust my legacy to someone.”

Will it be announcer Steve Higgins? He puts on a hilarious Cookie Lyon (Taraji P. Henson) impersonation, but it’s not him.

Is it The Roots’ drummer, Questlove? No? Perhaps it’s the group’s MC Tariq? Wrong again.

Watch the clip to find out whom Fallon finally chooses – and prepare yourself for some wonderful cameos from actual Empire stars Howard and Henson. 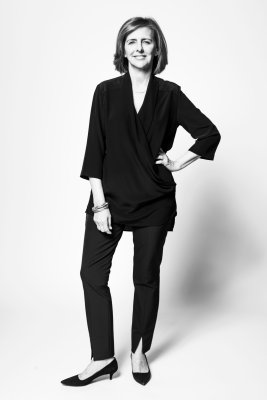 Nancy Meyers on Anne Hathaway, Amy Schumer and Why the Rom Com Is in a 'Coma'
Next Up: Editor's Pick