CAIRO—Egypt’s President Abdel-Fattah el-Sisi issued a raft of pardons of political prisoners on Wednesday, including journalists Mohamed Fahmy and Baher Mohamed, who were jailed more than a year ago over their work with Al Jazeera English.

The move was regarded as an attempt to burnish the image of Sisi’s government after two years marred by the arrest of thousands of dissidents, protesters, students and journalists. The announcement came on the eve of Sisi’s visit to New York for meetings of the United Nations General Assembly, a moment in the spotlight when the Egyptian regime could face increased scrutiny of its rights record.

The list of 100 pardons includes some of Egypt’s most famous political prisoners. Most prominent among them are Mohamed Fahmy and Baher Mohamed, who spent more then 400 days in prison over their work with Al Jazeera English. The pair were released by police on Wednesday afternoon.

The journalists had been convicted of broadcasting “false news” in a trial that came to epitomize the way freedom of expression in the country has shrunk over the two years since Egypt’s military ousted the elected President Mohamed Morsi of the Muslim Brotherhood.

The pair were sentenced to three years in prison in August at the conclusion of a retrial, in a turn that surprised analysts, who expected the journalists to be acquitted of the most serious charges against them. A third journalist sentenced in the case, Peter Greste, was deported to his home country of Australia last February. It was not immediately clear if Greste was included in the list of pardons.

“Of course we’re very happy that he’s out of prison,” said Baher Mohamed’s wife, Jihan Rashed when reached by phone on Wednesday.

Also pardoned on Wednesday were Sana Seif, a prominent human rights activist, and Yara Sallam, a respected human rights lawyer with the Egyptian Initiative for Personal Rights. The two were arrested in 2014 following a demonstration against a law that bans any street protest staged without government permission. Ironically, they were sentenced along with a group of others under the same law they were protesting.

The friends and families of the prisoners reacted to news of the pardons with disbelief, which soon gave way to joy.

“We took it with a lot of skepticism at the beginning, but when it was confirmed by many different sources we were extremely pleased, ecstatic,” says Soha Abdelaty, a close friend of Yara Sallam and operations coordinator at the international feminist group RESURJ. “We had prepared ourselves psychologically that she’d be there for the full term.”

International human rights lawyer Amal Clooney, who represented Fahmy said in a statement, “I am absolutely delighted that Mohamed Fahmy and his colleague Baher Mohamed have been pardoned today. It has been a long ordeal, and we are grateful to President Sisi for exercising his power to pardon the two journalists. This is a historic day in Egypt where the government has finally corrected a longstanding injustice, and set two innocent men free.”

But thousands of others remain in prison under a vast political clampdown that began in 2013 after the military takeover, which was led by Sisi, who had been a military chief at the time. More than 40,000 people were arrested in the first year following the takeover, according to a count by the Egyptian Center for Economic and Social Rights. More than a thousand died in security forces’ assaults on demonstrations.

Among those still behind bars is Mahmoud Abu Zied, known by his nickname Shawkan, a young photojournalist held in pre-trial detention for more than two years after he was arrested while attempting to document a lethal assault security forces on protesters in August 2013. The presidential pardon only extended to those already sentenced, according to a statement from the president’s office.

“There are thousands of people like Yara who are unfortunately not very well known among our circles who will probably end up spending years in prison because of judges who have been politicized and want to punish them for what they’ve done, the role they’ve played in the revolution,” says Abdelaty, the rights activist and friend of Yara Sallam.

Many of those jailed under the anti-protest law are activists who were the public faces of Egypt’s Arab Spring uprising in 2011 that toppled President Hosni Mubarak, an autocrat whose ruled for some 30 years.

The Egyptian president’s office said in a statement that the pardons included those convicted of violating the anti-protest law and “assaulting police forces.” The statement said, ‘Other prisoners were pardoned due to their health conditions and on humanitarian grounds.”

Sisi had previously ruled out intervening in the Al Jazeera case, saying he would not disrupt the independence of Egypt’s judiciary. Egyptian judges have emerged as key agents in the political crackdown since 2013, sentencing hundreds to death in prison in mass trials.

The three Al Jazeera journalists had been arrested in December 2013 following a raid on a Marriott hotel in December 2013. They were accused of aiding the Muslim brotherhood and branded the “Marriott cell” by Egypt’s pro-government media. The journalists’ initial trial in 2014 was derided by rights groups and news organizations as a farce. During the trial prosecutors cited basic news reports and video clips found stored the journalists’ electronics as evidence of a plot to undermine Egypt’s national security. 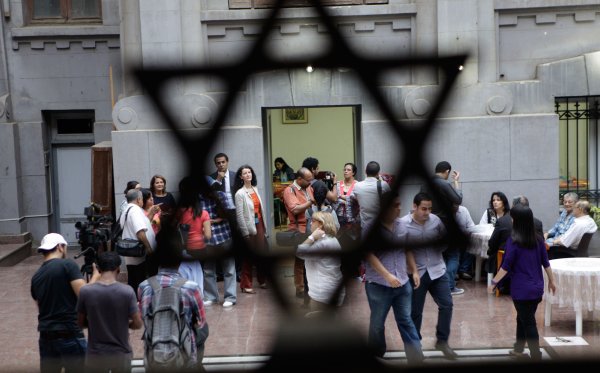 Meet the Last Jews of Cairo
Next Up: Editor's Pick