Ronda Rousey working out at in July 2015.
Jae C. Hong—AP
By Nolan Feeney

Ronda Rousey thinks she could beat Floyd Mayweather in a no-rules fight, but former UFC fighter Tank Abbott is weighing in on the hypothetical match—and has some harsh words for the mixed martial arts superstar.

In an interview with the Proving Grounds podcast, Abbott says Mayweather would “knock the living stuffing out of Rousey.”

He also said he’d give $100,000 to any woman who can beat him, but he warned that his challenger would “get bashed up good”—even though he wouldn’t train for a match with a woman.

“I don’t care, I will fight any woman on this Earth for free,” he said. “I will. She will have to make me a sandwich—that’s what I get for winning.”

Rousey herself isn’t interested in such man-versus-woman fights, however.

“I don’t think it’s a great idea to have a man hitting a woman on television,” she told the Daily Beast. “I’ll never say that I’ll lose, but you could have a girl getting totally beat up on TV by a guy—which is a bad image to put across. With all the football [domestic violence] stuff that’s been happening, not a good idea. It’s fun to theorize about and talk about, but it’s something that’s much better in theory than fact.” 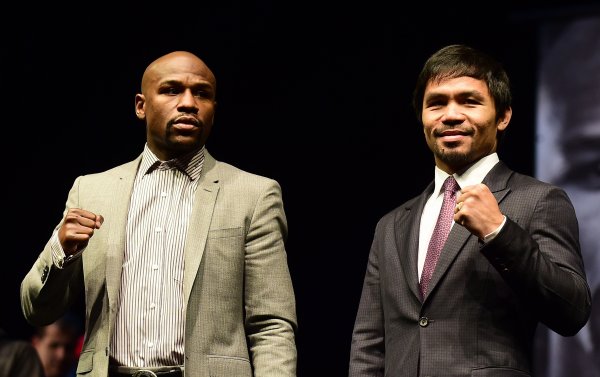 Pacquiao Wants a Rematch With Mayweather After IV News
Next Up: Editor's Pick