A Chinese Jet Performed an 'Unsafe' Move Near a U.S. Spy Plane

A U.S. Air Force RC-135 reconnaissance aircraft lifts off in this undated file photo. A similar jet flew a surveillance mission off the coast of China, May 7, 2001 as the United States resumed reconnaissance flights in the region for the first time since the April 1, 2001 collision of a U.S. Navy plane and a Chinese fighter jet.
USAF—Getty Images
By Nash Jenkins

A Chinese military jet intercepted a U.S. spy plane off the coast of China last week, using a maneuver that Pentagon officials called “unsafe” when announcing the incident on Tuesday.

“One of the maneuvers conducted by the Chinese aircraft during this intercept was perceived as unsafe by the RC-135 air crew and at this point, right now, there’s no indication this was a near collision, but the report that came back was that the plane operated in an unsafe fashion,” Pentagon spokesman Peter Cook said, according to CNN.

The U.S. Boeing RC-135 reconnaissance jet was flying above the Yellow Sea around 80 miles east of mainland China on Sept. 15 when a Chinese military plane passed within 500 ft. of its nose. The Pentagon has not described the maneuver as aggressive, but said authorities were reviewing the incident; however, Senator John McCain called the intercept “dangerous” and cited it as proof that “China feels emboldened to continue its pattern of aggressive behavior in the Asia-Pacific region.”

The event calls to mind a similar incident last August, when a Chinese plane trailed a U.S. naval jet over the South China Sea, at one point coming as close as 20 ft.

The Pentagon’s announcement on Tuesday coincided with the arrival of Chinese President Xi Jinping in Seattle — “America’s gateway to Asia,” he has called it — where he will meet with a string of prominent business leaders in the city, including Apple CEO Tim Cook and investor Warren Buffett. He will then travel to Washington to dine at the White House with President Barack Obama. 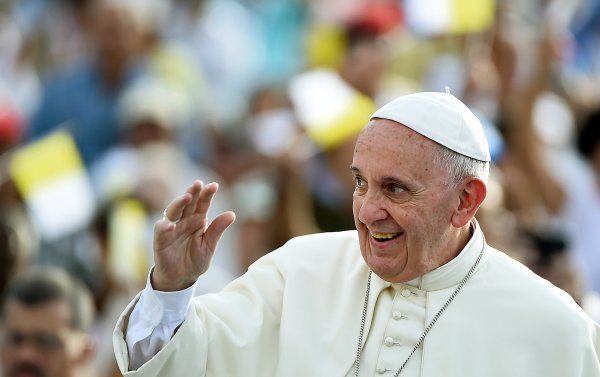 The Entire 2000 Year History of the Pope in One Graphic
Next Up: Editor's Pick