Donald Trump on Stephen Colbert: Mexico Will Have to Build the Wall

Donald Trump is returning to the issue that helped propel him to the top of the Republican race for the presidential nomination, telling The Late Show host Stephen Colbert on Tuesday that he would build a “great and beautiful wall” along the Mexican border.

“We are going to build a wall. You’re going to pay for the wall,” the brash billionaire said he would tell the Mexican government. “The wall itself, we own.”

Trump, who has been riding high in the polls since he entered the topsy-turvy chase for the GOP presidential nomination. He spent the summer hurling invectives at his rivals and offering a string of insensitive assessments of Americans. He also had ugly words for immigrants in the country illegally, and vowed to erect a thousand-mile wall to block new immigrants coming across the U.S.-Mexican border. Voters, in turn, rewarded him with increasingly strong support.

Read More: The Donald Has Landed

Until recently, that is. Last week’s debate at the Reagan presidential library seemed to be the first signs of vulnerability. Fellow business executive Carly Fiorina delivered a stand-out performance and directly confronted Trump about his impolitic remarks about her appearance. Trump was left blushing and spent much of the rest of the debate sulking.

Trump, however, is retrenching. He was his typical self on Colbert’s program, boasting of his crowd sizes, poll numbers and personal wealth. Trump repeatedly says he is not accepting donations from supporters and instead prefers to pay for the campaign out of his deep pockets. After all, that’s the perk of being a billionaire.

“I don’t want the money from the lobbyists and special interests,” Trump said.

Trump said he didn’t want to talk about Obama’s birthplace any more. Instead, he wanted to talk about veterans. “They’re treated worse than illegals,” Trump said of immigrants in the United States illegally.

Trump’s entire campaign has been draped with a surreal quality. Colbert nodded to doubts that Trump was serious about being President, or if this is all part of Trump’s elaborate play for publicity.

“Would that be a step down for you? You know what the pay is like,” Colbert asked.

“It would be my great honor,” Trump replied. Colbert continued: “You seriously want the job?”

As Trump sat down on Colbert’s stage, the comedian acknowledged that he, like so many television hosts, had enjoyed Trump’s campaign as a punchline.

“You are setting the world on fire,” Colbert said. “I want to think you for running for President. I’m not going to say this stuff writes itself, but you certainly do deliver it on time every day,” Colbert said. 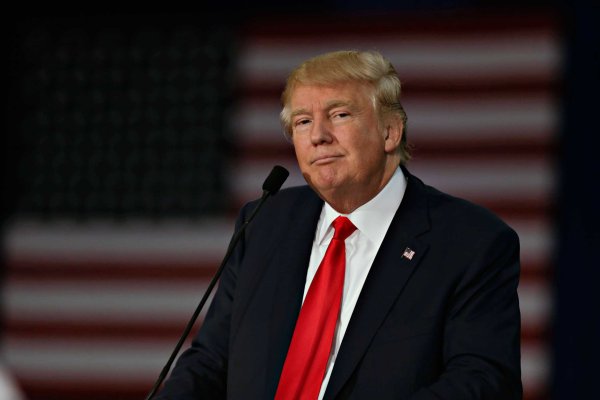 Donald Trump Invited Twitter to #AskTrump Anything and Here's What Happened
Next Up: Editor's Pick