Politicians and policymakers have long explained their opposition to action on climate change as an effort to protect the economy and jobs. Reducing harmful greenhouse gas emissions would require devastating economic losses, their argument goes.

But in recent years large corporations have changed their tune, slowly eroding the economic argument for inaction. On Wednesday, nine Fortune 500 companies announced plans to switch to sourcing 100% renewable energy, joining a growing group of corporations recognizing the risks of climate change.

“In the early 90s there was a sense that business was holding us back and governments were trying to push forward,” says David Levy, a professor at the University of Massachusetts, Boston. “Now, companies are coming forward to say, ‘This is important.'”

Companies have been aware of the risks climate change poses to their businesses for years—even decades—but developments this year may leading to a tipping point, experts say. Last month, the White House announced a series of landmark regulations to address global warming, and negotiators from around the world are expected to reach a historic agreement to cut greenhouse gas emissions in United Nations negotiations in Paris later this year.

Companies taking part in Wednesday’s announcement, a list that includes household names like Walmart, Goldman Sachs and Starbucks, have set individual time frames to go 100% renewable, from a 2015 deadline set by Voya Financial to a 2050 deadline set by Johnson & Johnson.

“Companies have looked at climate change and said, ’It’s not if we have to address it, but when,'” says University of Michigan School of Business Professor Andy Hoffman. “A lot of them are looking at the shift in the conversation and thinking now is the time to start.”

Businesses have a number of reasons to act on climate change. In addition to gaining positive publicity, companies hope to mitigate some of the financial risks climate change poses to their businesses. A Citigroup report released last month found that minimizing temperature rises could minimize global GDP loss to the tune of $50 trillion in the coming decades.

“Lowering risk, protecting against price rises, saving millions and boosting brand is what shaping a low carbon economy is all about,” says Mark Kenber, CEO of the Climate Group, which organized Wednesday’s announcement.

The threat climate change poses to the world economy may be why some companies have committed to steps beyond just sourcing renewable energy. Microsoft, for instance, sources entirely renewable energy and buys carbon credits to make up for it carbon emissions in other areas like travel. Marks & Spencer, one of the United Kingdom’s largest retailers, went entirely carbon neutral in 2012, reducing its energy usage and offsetting what it did use by funding projects that reduce carbon dioxide levels in the atmosphere, said Mike Barry, the company’s director of sustainable business, at a press conference on Tuesday.

“If we’re going to get tens of thousands of companies to do it, they have to see the business case,” he said. “We can’t just ask them to do it.” 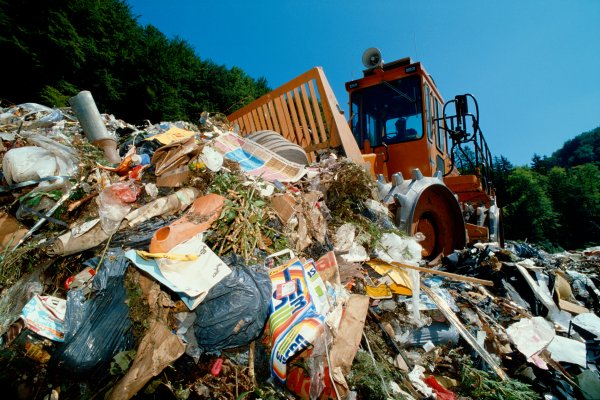 How Your Trash Is Contributing to Climate Change
Next Up: Editor's Pick